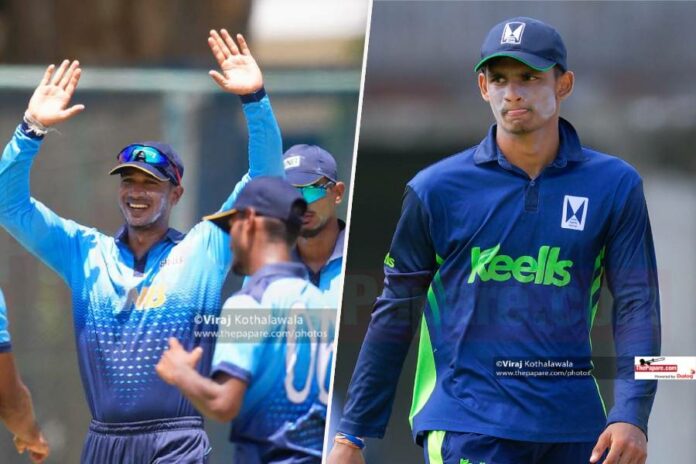 The two teams who topped the table at the end of the league stage, CDB Finance and Mode Engineering, were knocked out of the tournament today, as the two teams who made it to the semi-finals via the quarter-finals went past the two in-form teams who gained direct qualifications for the semis. Unbeaten CDB Finance’s defeat was the biggest upset as HNB, who ended the league stage just one place above the last spot, made a complete turnaround at the expense of the table toppers.

In the first semi-final at BRC grounds, JKH recorded a comprehensive 7-wicket win, chasing down the 178 made by Mode Engineering in just 36.3 overs. The JKH spin attack comprising of Duvindu Tillakaratne’s left-arm spin and Akila Dananjaya’s right-arm spin completely dismantled the Mode Engineering batting order after they won the toss and elected to bat first. Skipper Ishan Jayaratne also picked up 3 wickets to complete an impressive bowling performance for his team.

The JKH run-chase was all about the unbeaten 145-run stand between Sadeera Samarawickrama and Ahan Wickramasinghe. The duo started off with a brilliant act of repair work as they were 3 down for 34 in just the 10th over. Samarawickrama, playing the anchor role, took 92 balls for his 50, while the youngster Wickramasinghe scored a brilliant century in just 95 deliveries with 5 sixes and 2 fours.

The other semi-final at Thurstan College grounds went down to the wire as the veteran Chamara Silva had to step up for HNB with an unbeaten knock of 36 to take his team home in the penultimate over, with just 2 wickets in hand. Apart from Silva, schoolboy Raveen De Silva and Skipper Madawa Warnapura also contributed with invaluable knocks of 48 and 41 respectively.

Earlier on in the day, Warnapura’s off spin and Gayan Sirisoma’s left-arm spin wreaked havoc for CDB Finance, picking up 3 wickets apiece and restricting them for 195.

HNB and JKH will now play in the Final of the 29th Singer-MCA Super Premier League 2022. The date is yet to be confirmed pertaining to the delay caused due to the country’s unpredictable situation.