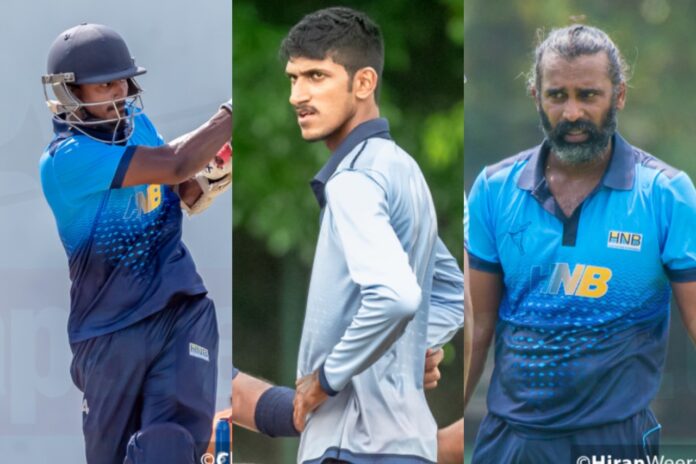 The final quarter-final of the 29th Singer-MCA Super Premier League 2022 was played today between Hayleys and HNB at Bloomfield Grounds, as the latter recorded a comfortable 5-wicket win.

HNB, placed 5th in the points table at the end of the league stage below defending Champions Hayleys, put up a clinical performance with both bat and ball as they outclassed Hayleys after winning the toss and electing to bowl first. The 45-over game, shortened after a delayed start due to a wet outfield, saw Hayleys scoring a modest 212 and losing 9 wickets in their allotted 45 overs.

The standout performance for Hayleys with the bat was all-rounder Lahiru Samarakoon, who scored a quickfire 27-ball 49 with 4 boundaries and 4 sixes. Batting at number 9, the big left-hander was involved in a 57-run 9th wicket stand with Kalana Perera to help Hayleys bailout from an embarrassing 137 for 8.

Apart from Samarakoon, wicket-keeper Vishad Randika and opener Ron Chandraguptha too contributed with 48 and 42 respectively.

HNB’s decent bowling effort was then backed up by a brilliant run-chase as the veteran Chamara Silva guided HNB towards victory, putting up an unbeaten 134-run stand for the 6th wicket. The duo had to rebuild the HNB innings from 80 for 5 after opener Kasun Abeyrathne departed for a well-made 56.

Silva played a more cautious knock, taking 75 balls for his 65, while Jayasena scored his 66 in less than a run-a-ball, spending just 64 balls as HNB reached their target with 3 overs to spare.

“Interesting Fact – Silva, who is still going strong in his 40s, has made his international debut for Sri Lanka (ODI in 1999 vs Australia at RPS Colombo) even before his 22-year old batting partner Jayasena was born (2000).”

HNB will now meet the unbeaten CDB Finance in the semi-final.