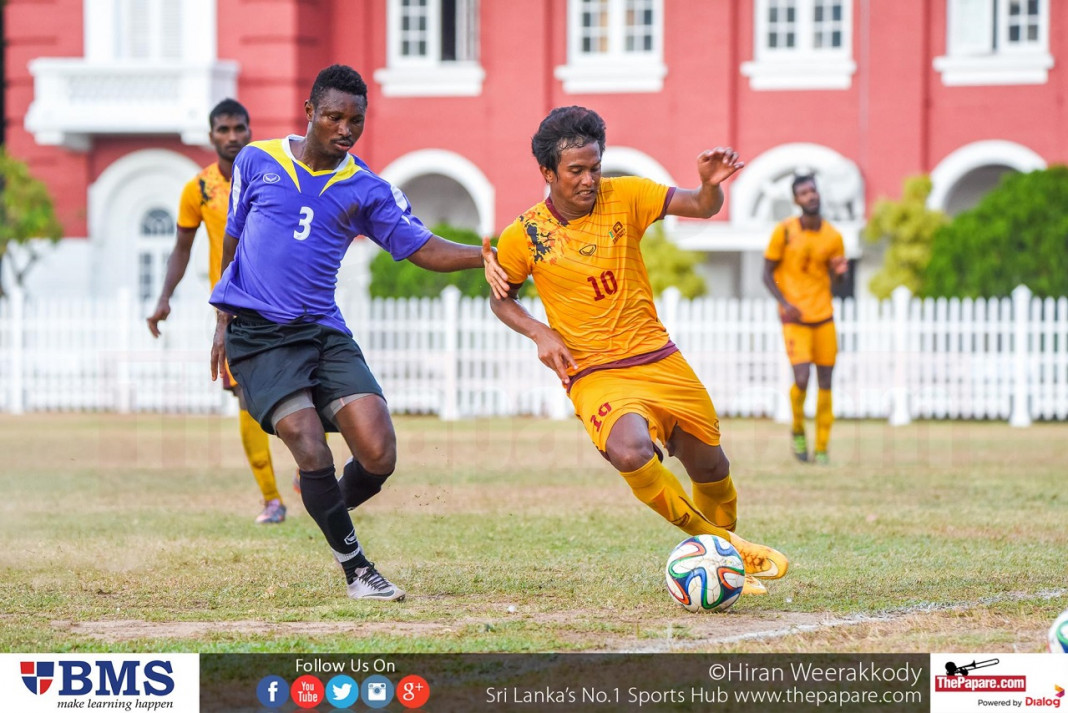 The friendly encounter between Sri Lanka National Football Team and Foreigners XI ended up in 2 all draw as both teams contributed with a dim and dull performance at the Police Park.

With a tour to Cambodia & Thailand in sight, Sri Lanka National Football Team arranged a match between the Foreigners XI, consisting of foreign players who play in Sri Lankan club leagues.

The match started with a spark with Sri Lanka attacking through the right flank had two simple opportunities to go 1-0 up, but both Zarwan Johar and Gnanaruban Vinoth couldn’t find the target.

The match took a back foot after the start as both teams didn’t show any urgency and the desire to score a goal. Sri Lanka enjoyed a good period of play controlling the midfield. Captain Mohamed Rifnaz played a pivotal role marshaling his troops but couldn’t find a clear cut chance.

Both goalkeepers had nothing much to do as the attempts were rather weak or out of target.

Foreigners had their chance near the half hour mark but Afonja Jibolo’s header lacked precision.

On the other hand, Rifnaz went for his trade mark hurling goal but the ball didn’t bend on time to get into the posts.

The visibly tired players killed time in the last few minutes waiting for half time to arrive.

The second half was way better than the first half as both teams started to open up a bit.

Sri Lanka was awarded a free kick in the 49th minute. Zarwan who stepped up made no mistakes as his effort settled into the near post past the diving goalkeeper.

After the lead, Sri Lanka went back into the shell playing a defensive game. It looked like match will end up with the result as both teams didn’t show any intention in building up attacking plays.

Around the 70th minute Sri Lanka coach Dudley Steinwall brought out the stars in Rifnaz and Zarwan back to the sidelines. Pouncing on the opportunity and thanks to an unwanted rush in by the goalkeeper, Jibola was able to bring the match into contention again with a tap in.

Sri Lanka looked shaky afterwards and looked like they may crumble down but Gnanaruban Vinoth had other ideas. Another mistake from the goalkeeper, this time by the Foreigners XI team gave Vinoth the chance to regain the lead and he gleefully accepted with a chip in the 74th minute.

Sri Lanka was struck back again even before the celebrations of the previous goal was over as Isaac Aba scored for Foreigners with a right foot effort  after cutting in twice to fox the defenders.

The match boiled down to an engaging finale but both teams couldn’t produce the winner. Referee blew the final whistle to end the proceedings.

“Despite the performance not being top notch, I am happy the way the boys played offensively and specially defensively against physically tough opponents. There are quite a few mistakes to be rectified and we believe we can improve in the days to come. Our focus is to do well in the Cambodian Tour and I hope we can have another friendly or two before we take the flight.”

It certainly looked like there needs to be more hard work before the players leave to Cambodia in the first week of October. Fitness level of the players was one of the major concerns that should be looked upon.