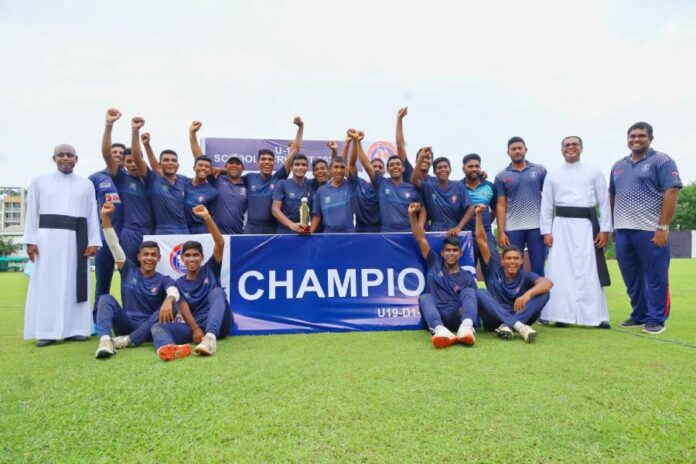 The late-bloomers in the Division 1 – Tier A of Schools U19 Cricket Tournament 2021, St. Joseph’s College, and the front-runners Royal College locked horns in the all-important finals today (01) at the NCC grounds in Colombo.

Coming into the game unbeaten in the tournament, Royal College were firm favourites of many critiques. However, St. Joseph’s were silently gearing for a feast down on the Royalists as they walked in as two-times defending champions of the past two completed competitions.

Having had the favour of the toss, the Josephians chose the obvious by batting first. Their openers, who put up a 161-run stand in the semi-finals to win the game wicketless, gave the Joes a fluent start with a 50-run partnership for the first wicket.

It was only then that the real show began. Shevon Daniel, a highly rated destructive left-hander who loves to go after the bowlers, walked out to the centre at No.3 for the Joes. One might not be very sure if the rest that followed was art or Cricket.

Daniel, on his merry day, is a captivating display for the spectators and a nightmare for the bowlers. He struck 9 handsome sixers, and carved 6 fours in his magnificent knock of 146 runs not-out.

The boys from Darley Road were elated by the end of their innings, as many would agree that 287 runs in a finals means that it is almost curtains for the opponents.

As expected, the pressure kicked in for the Royalists right from the start of the chase, and in no time they were in great struggles at 3 for 9 in 4 overs.

Skipper Ahan Wickramasinghe, who had a stellar run this season, was the pivot of hope for the Royalists. He did get a decent start and looked to be steadying the ship to some extent. However, the Josephian bowlers pressed him down so hard that he eventually succumbed with 37 runs to his name.

Royalist opening bowler Kavindu Pathirathne, who is known for his marvelous skills with the ball, compiled a show with the bat in his efforts of resurrecting the Royal dominance in the tournament. The left-hander scored a valiant 59 runs off 61 deliveries before falling for the off-spinner Shenuka de Silva.

Lahiru Amarasekara was the pick of the bowlers for the Joes with figures of 4 for 45. Skipper Dunith Wellalage and the fast bowler Deshan Senevirathne picked up 2 wickets each.

Royal managed only 3 more runs to the total after Pathirathne’s departure as St. Joseph’s recorded a grand 97-run victory to take back the trophy to Darley Roads for the 3rd consecutive time.