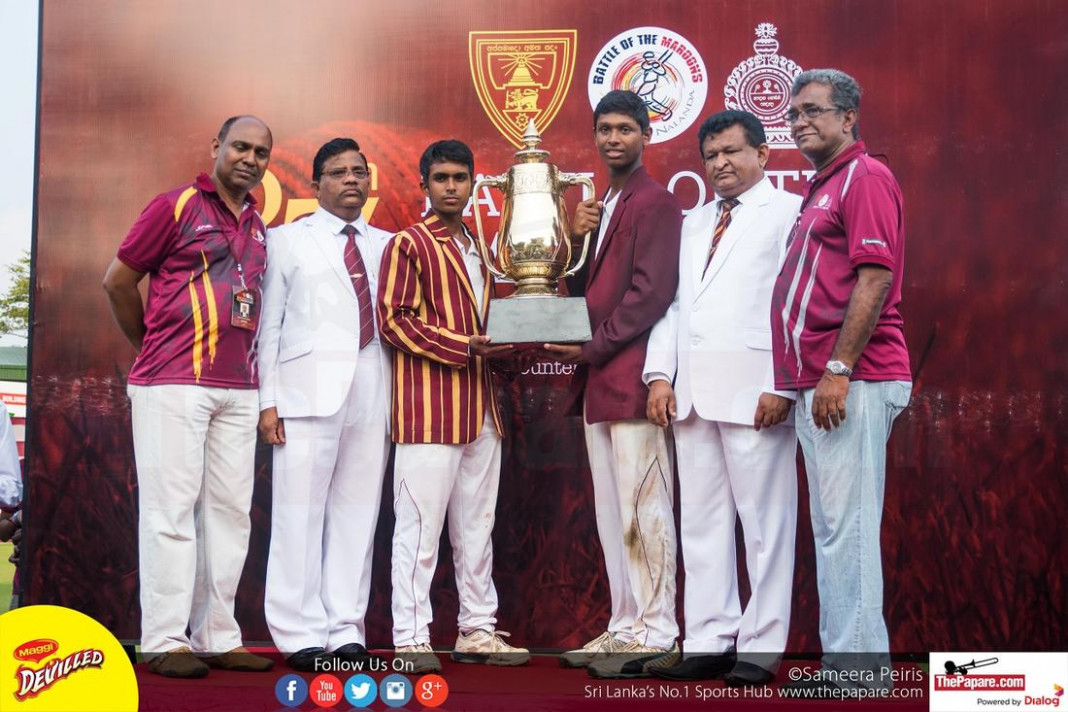 A sensational batting knock from the Anandian opening batsman Rahal Avishka abled them to thump Nalanda College on first innings at a most stirring 87th Battle of the Maroons encounter that was concluded at the SSC grounds today.

On the first day of play, the Nalandians dominated the proceedings in the early couple of sessions after being invited to take the first lease of the game on an unprejudiced wicket that did not affect the game much. Restricting the opening stand to a cheap 14 runs, Thinura Hettiarachchi was dismissed as the first batsman, guilty of nicking the ball to the wicket-keeper.

Engaging in a worthwhile partnership of 60 runs for the 2nd wicket Lakshitha Ranasinghe paired up with Nimnaka Rathnayake before Nimnaka was strangled for a well made 44 runs. The middle order of Nalanda College minimally succored to capitalize their innings when Ananda spinners pegged back the batting of their opponents sharing 8 scalps among them. Bringing some hope after losing two back to back wickets, Dilan Suraweera anchored the innings and was associated in a fruitful partnership of 30 runs for the 9th wicket to post a defendable 197 on the board.

The Anandian batting in the last session of the day seemed to be non-combative when they managed just 55 runs at the completion of 21 overs maintaining a run rate of two and a half per over. Resuming the overnight score, they exploited the proceedings on day two in a gluttonous manner. Rahal Avishka who was unbeaten on 27 at stumps, propelled a defiant 84 run knock that comprised 13 boundaries.

Assisted by the forties made by Asel Sigera and Kavishka Anjula later on, the Anandians put up a satisfactory 216 for the loss of 4 wickets before the sporty declaration kept the game in a sense of excitement. The paceman Suhanga Wijewardhana bagged a couple of wickets out of the four that fell.

Coming out to deal with the bat once again, Nalanda College started off discreetly which was proven when the scorecard appeared just 15 runs after 13 overs being bowled at an early stage of their innings. Struggling against the spin-pace duo from both ends, the Nalandians lost their key wickets at regular intervals. First to be dismissed was Kalana Perera who attempted to play a slog-sweep against the spin of Sammu Ashan that ricocheted off his elbow and banged back on to the stumps. The Sri Lanka under 19 deputy skipper captured two back to back wickets again that of Nimnaka Rathnayake and the experienced Malinga Amarasinghe who was brilliantly stumped by the wicket-keeper Nipun Haggalla. The captain of Nalanda College Dasun Senevirathne got into his rhythm but could not persist as he was deceived and trapped by the flight of the off spinner; Supun Waragoda. Supun had two other victims in his bag of wickets besides Dasun.

87th Battle of the Maroons; honours even on first day

Playing an isolated role at one end, Suhanga Wijewardhana built up the Nalandian innings cautiously after the spots of bother that came about. He remained undefeated on 40 as the recovered batting showed a total of 106 for 6. Owing to the interruptions caused to the play by frantic spectators, the umpires had to stop the match half-way around 4.30pm and the 87th Battle of the Maroons ended up in a tame draw that secured first innings credit to the Anandians.

The winning tally remains the same as Ananda is still ahead with 12 victories whilst Nalanda right behind claiming 6.