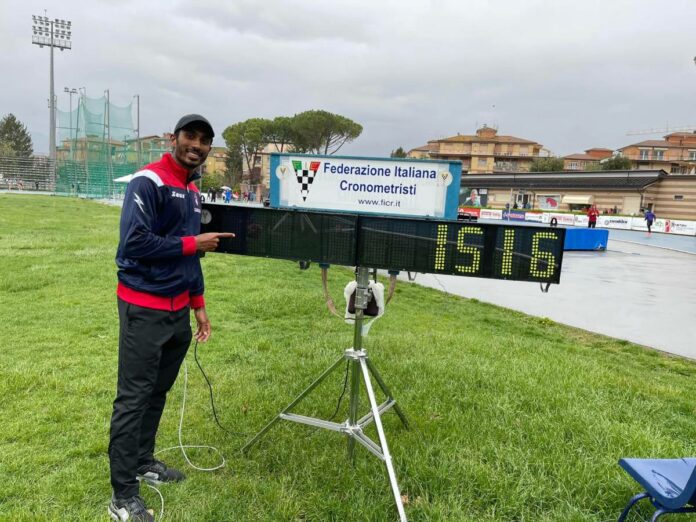 In his first international meet of the year, South Asia’s fastest sprinter Yupun Abeykoon set an Asian record in 150m at the Perso Trophy 2022, held in Reiti, Italy.

After kicking off the year in his motherland, Abeykoon returned to Italy where he had been professionally training since 2016. The Perso Trophy 2022 included the Men’s 150m event, in which Abeykoon took all the glory.

He clocked in at 15.16sec to set a new Asian record, beating Yoshihide Kiryu’s five-year record of 15.35sec. Kiryu set this record back in 2017 in Australia.

Abeykoon finished the event without a major lead from the athlete who finished second, yet his 15.16sec did the trick for his first record in the Men’s 150m (bend) event. Second place went to Chituru Ali with a timing of 15.17sec. Third place was won by Mattia Furlani with a time of 15.76sec.

Apart from Abeykoon, fellow Lankan Vinura Lakmal competed in the event and managed a 16.83sec, coming in last.

One would hope for this to be the kickoff of many records to come for Yupun Abeykoon, who had a stellar season in 2021 when he participated in his first Olympic Games in Tokyo, Japan. He also set the current standing Sri Lankan and South Asian record of 10.15sec last year.