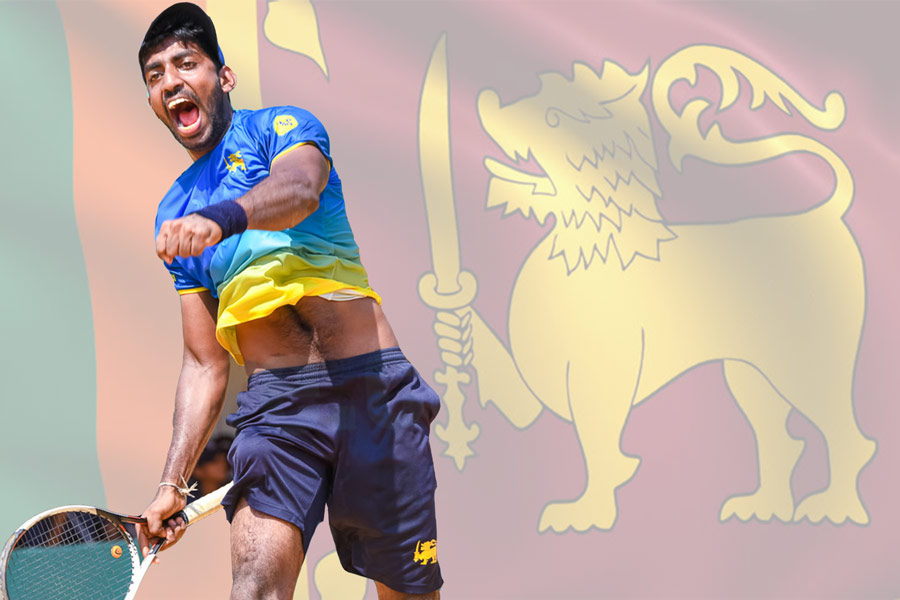 A tale of a boy who started his career playing on center court amidst hundreds of fans, competing for his alma mater. 10 years later, he is on the very same court with the very same fans cheering him on, only this time, he’s playing for his country.

This is the story of a 6-year-old basketball prodigy turned professional tennis player.

This is Yasitha De Silva.

Hailing from Ananda College, Yasitha De Silva was born into a family of lawyers. With no Tennis in his blood, Yasitha followed his elder brother Anjana who took on the sport first under the guidance of then and present coach of Ananda College, Anupa Matthemagoda.

He immediately picked up on the youngster’s talent and pulled him into the sport. Yasitha, taking up the game as a lefty, a rare trait in the game, saw his uniqueness nurtured by Matthemagoda. Yasitha will forever be grateful for his sensei’s guidance from the Mini Tennis achievements to the National level hero he is today.

Being an individual sport, many of the greatest outputs of Tennis emerge through private avenues, unlike in cricket and rugby in Sri Lanka. Yasitha, is one of very few who took his first steps into stardom, at school.

He was never the one to dream big for national championships, but he was however, a strong representative for his alma mater. His goal was to win as many a match for his school but when he started training privately with his current coach Niranjan Kasitechchy, his ambitions started to drift towards bigger things.

“He changed everything, he was the one who told me first that I was good enough to play for Sri Lanka. He showed me a brighter future I could have in the sport” Yasitha said, on his coach’s influence.

Winning junior events along the way, Yasitha was rising quick. His breakthrough came in the year 2011, when he made the Junior Davis Cup team. Starting his way from the bottom, he won close to 15 matches in the trials and earned his spot in the 3-man team.

He only elevated from here; winning many A and B Grade tournaments around the island. In the year he sat for his Ordinary Level Examinations, he conquered the outstation tournaments; Nuwaraeliya, Bandarawela, Matale and Kandy were all his.

Outstanding consistency like this is what drove him to Island top rank in both the Under 16 and Under 18 Boys’ age groups parallelly. Yasitha’s ability to juggle the game with studies has been tremendous, touring to compete for Sri Lanka in the junior international tournaments but still excelling his studies too.

“You don’t have to sacrifice one thing for another. It’s tough, but if you keep at it, I think victory will come. And it’s been a blessing, really, to be able to juggle both studies and sport so well and not have to give up on something I love.” commented Yasitha on maintaining a balance between sports and studies.

“What they say about sports being healthy for your brain is actually true. I stopped training for three months to study for O/L’s and found it really hard to get back to form. But for A/L’s I only stopped for a couple week s at most, and I still managed to get 2 A’s and a B, without having to compromising on my playing”

Yasitha’s parents couldn’t have paved the way for their son to succeed any better than they did. Yasitha mentions this changed the course of many crucial instances in his life.

“They never pressured me for victories. They somehow made sure that we knew this was just a game. It’s just another sport – if you do well great, if you don’t, it’s okay!”

As a result, Yasitha was a realistic and humble man when it came to accepting the outcomes. As any sportsman, breakdowns have come and gone. But he takes pride in having the grit and perseverance to find the positivity and rise above it all.

The days and nights he spent on court or at the gym instead of hanging out with his peers, were validated as he grew older.

Yasitha recognizes Harshana Godamanna as a figure to follow, a man who has taken Sri Lanka Tennis to its highest ground in the history of the game. Growing up watching his senior lefty play, learning the trait a little better by his wise words of experience and to end up playing in the same team as him, is a dream living itself.

When asked where his motivation comes from, Yasitha smiled and said, “A lot of things”. And went on to explain the main reason, which is one that stands taller than any.

“Motivation is every time you put on that Sri Lanka jersey. The moment you step on to the court and feel the purpose of you being in that moment, you realize how big this is. You are playing for the sole reason of making your country win and there’s no better motivation than that.”

One regret in his career so far would be the lack of a Junior National title in the local Nationals Tennis Championship. But with years left for retribution in the senior Nationals, Yasitha is determined to get his name on the wooden boards of glory at the Sri Lanka Tennis Association.

“There are certain things you can control and some you can’t. Do whatever you have the power to in the best possible way and be happy with the results, good or bad. It’ll be a sweet ending.”