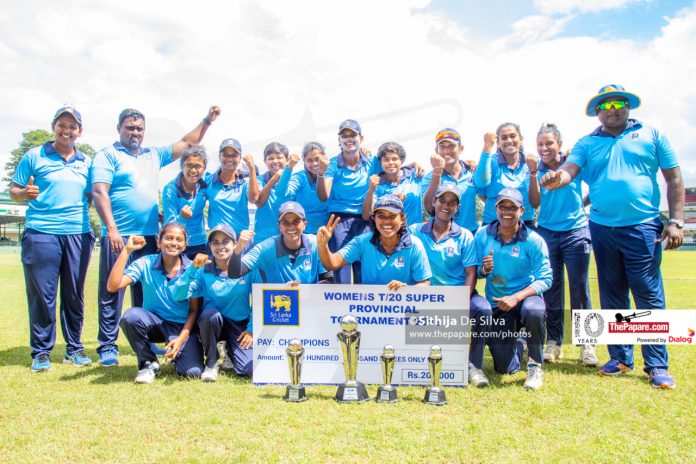 All-rounders Shashikala Siriwardene and Hansima Karunaratne shone with both bat and ball to help Team Dambulla register a comfortable 7 wicket win over Team Colombo in the final of the Women’s Super Provincial tournament at the SSC.

After sneaking through to the final on Net Run Rate, Colombo were handed a major boost when skipper Oshadi Ranasinghe won the toss and chose to bat. That was as good as it got for them however as the Dambulla bowlers managed to restrict them to just 98 all out in 18.4 overs.

Skipper Ranasinghe was the only one to cross the 20-run mark while national caps Sugandika Kumari, Hansima Karunaratne and Shashikala Siriwardene combine to pick up 7 wickets between them for just 52 runs.

On the day which she got a call up to play at the WBBL, Chamari Atapattu lit up the SSC with a ferocious……………..

Throughout the tournament, Dambulla had proved to be the best batting line-up in the competition, with their top order boasting the likes of Chamari Atapattu, Hansima Karunaratne, Prasadini Weerakkody and Shashikala Siriwardene, who had all taken turns making runs in the 3 league games prior to today.

This time it was Shashikala Siriwardene who stepped up, as the right hander scored a fluent 56* in 41 deliveries to take Dambulla home in just 16.2 overs. Karunaratne chipped in with 21. The Colombo bowlers were unable to make much of an impact, apart from Sanduni Nisansala, who picked up 2 wickets to take her tally to 5 in 3 games.