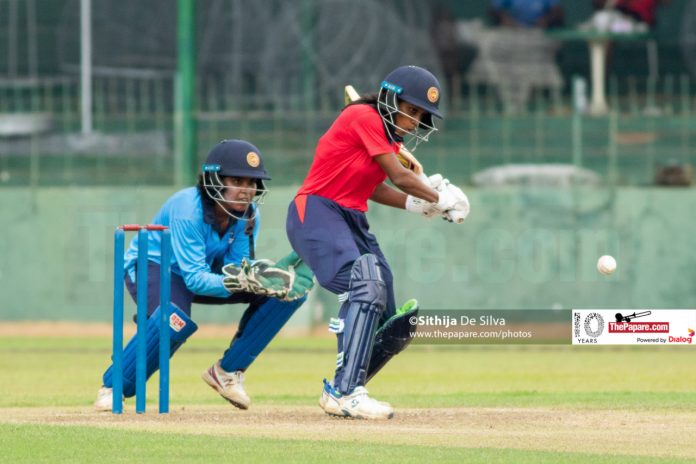 Harshitha Samarawickrama blasted a 49-ball 66* in the Women’s Super Provincial opener as Team Kandy got their tournament off to a successful start, defeating Team Dambulla by 13 runs under the Duckworth Lewis Method.

Kandy skipper Samarawickrama won the toss and decided to field first at the SSC grounds but the Colombo girls put on a decent effort to get to 132 in their allotted overs. Hansima Karunaratne and Prasadini Weerakkody were the chief contributors with the bat for Colombo, making 42 and 41 respectively. Veteran Shashikala Siriwardene chipped in with 27 off 19 deliveries to give the innings some impetus.

Kandy’s spin twins Kaveesha Dilhari and Umesha Thimashini shone with the ball, picking up three wickets between them – the latter impressing with economical figures of 1/9 in 3 overs.

Chasing a tricky target with rain clouds hovering, Kandy raced to 120 in 17 overs before bad weather brought to an end the day’s play. Continuing on from her form in international cricket, it was Samarawickrama who did the bulk of the work for the Kandy lasses with the bat with some elegant shots on her way to a blistering half-century.

The 2nd game of the day between Colombo and Galle was called off due to inclement weather.