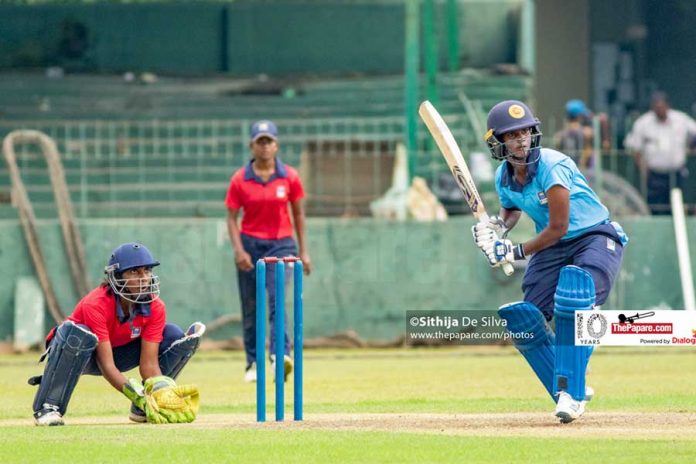 Team Colombo registered a comprehensive victory against Team Kandy thanks chiefly to the efforts of Sanduni Nisansala with the ball, thereby securing a place in the final of the Women’s Super Provincial Final on Net Run Rate. Meanwhile, Dambulla clinched their 2nd win of the tournament earlier in the day to take their spot in the final.

Galle, winless in the tournament, won the toss and decided to bat first at the SSC. The decision didn’t pay off however, as they were only able to labor their way to 105/7 in their allotted overs. Skipper Anushka Sanjeewani (44) was the top scorer for Team Galle but received little support from the other end as none of the other batters crossed the 20-run mark. Shashikala Siriwardene bagged 2 wickets to top the bowling cards but some careless running saw Galle surrender 4 wickets to run-outs.

Harshitha Samarawickrama blasted a 49-ball 66* in the…..

Chasing a modest target to confirm their spot in the final, Dambulla were in some strife at 53 for 6 at one stage, with super stars Chamari Atapattu and Shashikala among those dismissed early on by the Galle bowlers. With Galle closing in on an unlikely win, all-rounder Hansima Karunaratne stepped up with the bat for Dambulla as she has done all series, almost single-handedly taking her team across the line. Karunratne made 64 off 54 deliveries, slamming 4 fours and 3 sixes. The Dambulla innings too saw the batters gifting away 4 wickets to run-outs, but they eventually got to the target with 3 wickets in hand.

With Dambulla having claimed one spot in the final, the game between Colombo and Kandy turned into a virtual semifinal, with Colombo needing a win to go through, while Kandy could have snuck past their opponents if the match ended in a tie or no result.

Colombo skipper Oshadi Ranasinghe won the toss and elected to have a bat on the SSC surface. Her decision paid off as Team Colombo made a strong statement, making 163/4 against a bowling attack which has dominated the competition so far.

On the day which she got a call up to play at the WBBL, Chamari….

Opener Hasini Perera top-scored with 60 while veteran wicketkeeper-bat Dilani Manodara made 45 and the skipper herself chipped in with 33. Kandy’s young bowling attack which had done so well in the past couple of games faltered at the final hurdle as none of them could put the brakes on the Colombo innings; Kaveesha Dilhari, Sachini Nisansala, Umesha Thimashini and Tharuka Shehani picked up a wicket apiece.

A tough chase followed as Kandy lost their first 3 wickets for just 19 runs. Skipper Harshitha Samarawickrama continued her scintillating form, making another half century but once again she was left to do too much on her own as Kandy eventually finished 49 runs short of the target.

Off spinner Sanduni Nisansala was the pick of the bowlers for Colombo as she claimed figures of 3/16 while experienced campaigners Oshadi Ranasinghe and Ama Kanchana chipped in with 2 apiece.

Team Kandy was left to rue their tie against Galle, a game which they should have won, chasing a paltry 79, especially after their encouraging win against tournament favourites Dambulla on day 1 of the tournament.

The final of the competition between Dambulla and Colombo is scheduled to be held tomorrow at the Sinhalese Sports Club Grounds in Colombo from 9.30 am onwards.