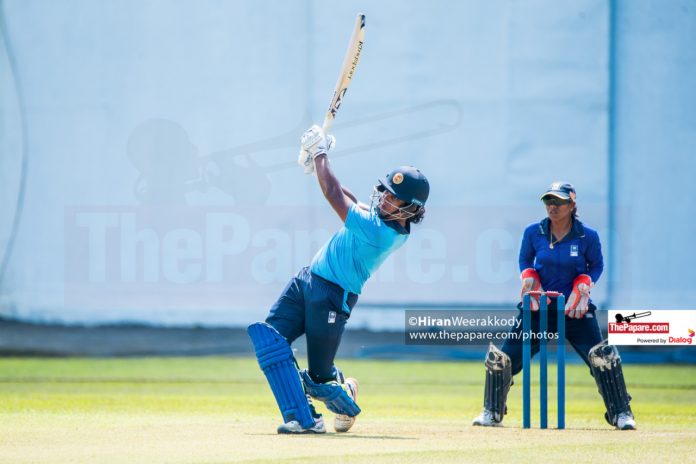 On the day which she got a call up to play at the WBBL, Chamari Atapattu lit up the SSC with a ferocious 95 as Dambulla registered their 1st win of the Women’s Super Provincial Cricket Tournament against Team Colombo. The rain-hit 2nd match of the day, between Kandy and Galle ended in a nervy tie.

Sri Lanka Women’s T20I skipper Chamari Atapattu has been called up to the Melbourne Renegades squad in the Women’s………….

Atapattu was unable to contribute to the Dambulla cause last evening as they went down to the Harshitha Samarawickrama-led Kandy team but the skipper made up for it today, slamming 95 off just 47 deliveries after winning the toss, to help Dambulla post 182 in their allotted 19 overs. Shashikala Siriwardene, Hansima Karunaratne and Prasadini Weerakkody all chipped in as the Colombo bowlers struggled to stem the flow of runs.

Atapattu was not done for the day however, as she led from the front with the ball as well, claiming 2 wickets for 17 runs as Colombo succumbed to a 46-run loss; they were bowled out for 136. Dilani Manodara crossed the 50-run mark but her knock went in vain.

The 4th game of the tournament was severely affected by the bad weather and ended up as a nail-biting tie, despite another fluent knock from Kandy skipper Harshitha Samarawickrama.

Kandy were ruthless with the ball as the young team gave the ladies from Galle no room to move, restricting them to a paltry 78 all out in 19.4 overs. 18-year-olds Sachini Nisansala, Umesha Thimashini and Kaveesha Dilhari picked up 7 wickets between them, with Nisansala picking up 4 for 13 in her 4 overs.

What should have been an easy run-chase was overcomplicated by the cautious batting and despite the best efforts of Samarawickrama, who made 44, when the rains came down Kandy were level with the D/Ls par score and had to settle for a tie.

Malsha Shehani was the one who turned things around for Galle as she registered figures of 3/6.