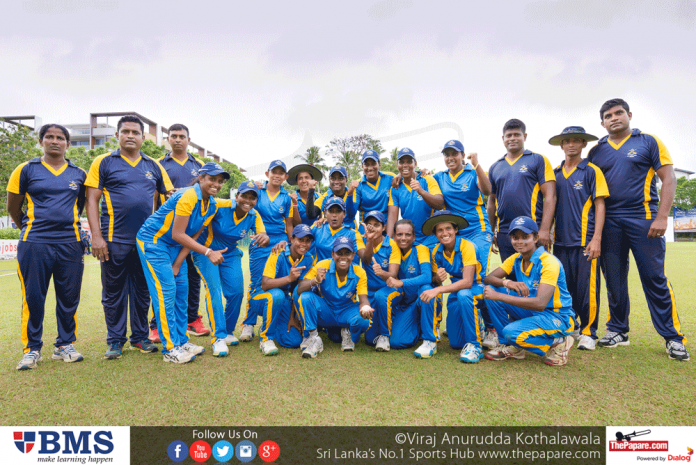 The Women’s Division I limited overs tournament was brought to a close today with Army A defeating Army B in what turned out to be quite a glum contest.

Earlier this week ,defending champions Navy A had qualified for the final after defeating Army B in their semifinal encounter held at the FTZ grounds in Katunayaka however ThePapare.com found out that the Navy team had been subsequently suspended for undisclosed reasons. Thus the two teams from Army SC faced off in the finals.

Army B won the toss and put the opposition in to bat on a flat track at the Mercantile Cricket Grounds. Army A exerted their dominance right from the word go as national cricketer Rebecca Vandort took on the bowling early on. Although they lost 2 early wickets, the run-rate never dipped beyond the 4 runs-per-over mark as Vandort and Nipuni Hansika smashed the bowlers to all parts. Vandort fell 20 short of a ton but Hansika, who had played a crucial role in their semi-final win over Air Force SC, made the most of her start, going on to make 104 runs which included 15 shots to the boundary.

Quick-fire 30s from Damayanthi De Silva and Janani Kaushalya helped them post 285 in their allotted overs with just 5 wickets going down.

It was clear from the very beginning of Army B’s chase that their goal was to survive the 50 overs and not actually go for the win. They lost early wickets and that did not help their cause as 4 of the 6 bowlers used by Army A picked up wickets.

Niluka Kushanthi, Ayesha Prabodhanie and Krishanthi Sandamali were the only batters who got to double figures with only one of them being able to achieve a strike-rate over 40. They were able to accomplish their goal of not being bowled out however as they ended with 96 for the loss of 7 wickets.

All the Army bowlers did their jobs and registered miserly figures at the end of the day. Achini Kulasuriya and Niluka Karunaratne picked up 2 wickets apiece while Lakmali Methananda and Damayanthi Silva grabbed a wicket each.