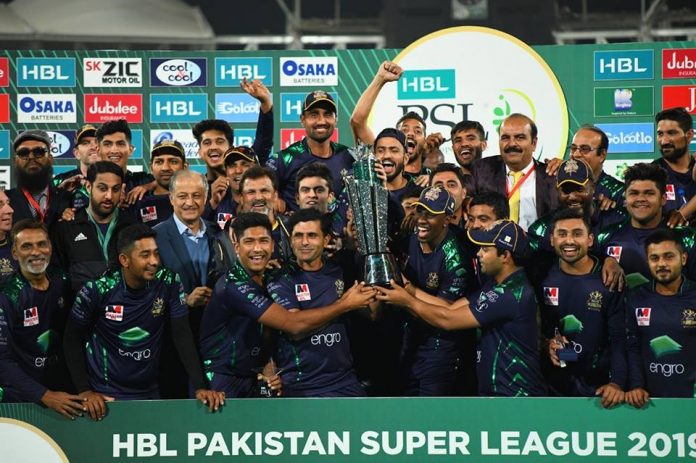 Quetta Gladiators won its first Pakistan Super League Twenty20 title on Sunday with a thumping eight-wicket victory over 2017 champions Peshawar Zalmi in the final. Darren Sammy-led Peshawar, playing in its third straight PSL final, was restricted to 138-8 after being put into bat by Quetta captain Sarfaraz Ahmed. Improving paceman Mohammad Hasnain claimed 3-30 from his four overs.

In reply, Ahmed Shehzad (58 not out off 51 balls) led Quetta to 139-2 in 17.5 overs after former Australia international Shane Watson was run out early for seven in the run-chase. South African Rilee Rossouw remained unbeaten on 39 off 32 as Quetta avenged its loss to Peshawar in the 2017 final.

Former Spain footballer Carles Puyol was among the 32,000 fans at the National Stadium. Puyol is in the southern port city of Karachi to promote exhibition soccer matches in Pakistan. “It’s an amazing welcome, the people are very friendly. I’m very happy to be here,” Puyol told a capacity crowd when he was invited onto the stage during the closing ceremony.

Earlier, a minute’s silence was observed in memory of the 50 people killed after a gunman attacked two mosques in the deadliest mass shooting in New Zealand’s history on Friday. More than 250,000 spectators turned up to the newly renovated National Stadium as the Pakistan Cricket Board successfully hosted this year’s eight PSL games in Karachi in a bid to convince overseas teams to resume playing international cricket in Pakistan.

A total of 26 PSL games took place in the United Arab Emirates _ with mostly empty stadiums _ but PCB chairman Ehsan Mani said that from next year the entire PSL schedule will take place in Pakistan.

Mani went out of his way to thank the 39 foreign players from countries including Australia, West Indies, England, South Africa and New Zealand for coming to Pakistan for the last leg of the PSL.

“You have seen for yourself the passion of people here and we hope to see you for all the PSL matches in Pakistan next year,” Mani said during the closing ceremony.

International cricket officials and representatives visited during the tournament.

“The fact is that the perception outside of Pakistan was that it was quite a dangerous place to visit in the past, and that perception slowly but surely has been changed through the good work that has been done here,” said ICC chief executive Dave Richardson.