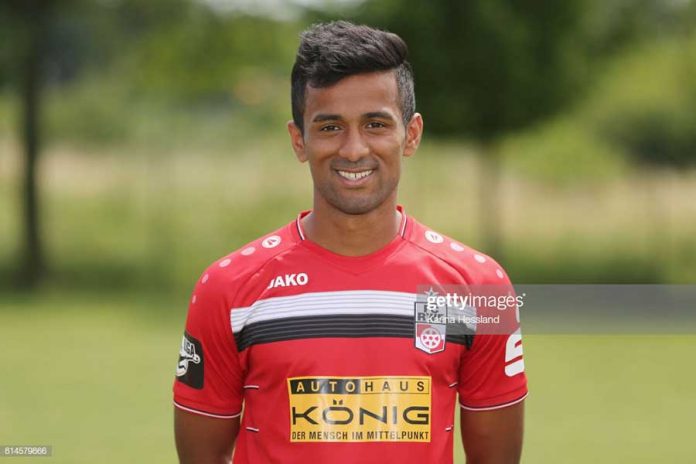 After much anticipation and administrative work, Waseem Razeek will join with the Sri Lanka National Squad tomorrow (12th Nov) for the upcoming  2022 FIFA World Cup Qualifier against Turkmenistan.

The news was confirmed to ThePapare.com by his father Jamal Razeek.

Razeek, a professional footballer plying his trade for Berliner AK07 in Germany played a match against Wacker Nordhausen yesterday and was released by his parent club to join the National Team for the on-going FIFA approved International break.

He will be in the squad for the 2022 FIFA World Cup Qualifier game against Turkmenistan which will be played in Ashgabat on the 19th November. Razeek, who has already represented Germany at junior level, has been goal scoring form having scored twice in the last three matches.

Waseem’s attempts to represent the country goes back a couple of years. He has been constantly traveling between the countries in order to obtain his dual citizenship and also get into the National Squad.

He was on the verge of representing Sri Lanka at the SAFF Championship in 2018 only to be told that he hasn’t spent much time with then squad to be included the tournament.

Nizam Packeer Ali the National Head Coach on numerous occasions had mentioned that in order to play for his team a player must be with the squad for a considerable amount of time. This was also stressed by the President of FFSL.

After much deliberation and relentless effort by Waseem, his family, media and the fans the dream to represent Sri Lanka has finally arrived. Waseem will give an added advantage for the squad in terms of experience and quality.