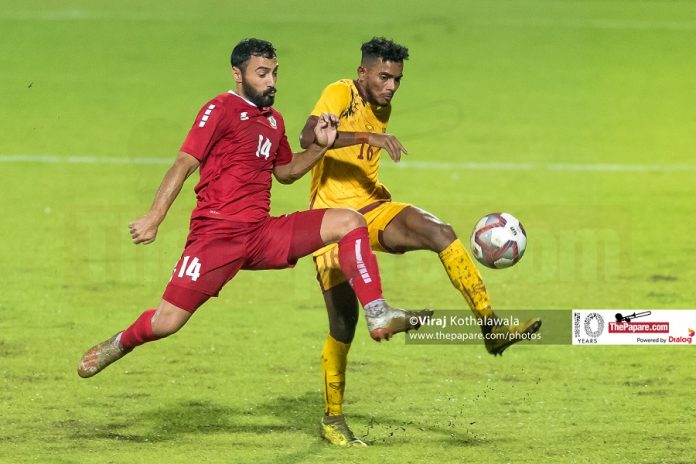 Sri Lanka took on Lebanon in their 4th game of the qualifying campaign for the 2022 FIFA World Cup and 2023 AFC Championship qualifying preliminary round match at the Race Course Stadium today (15).

Sri Lanka’s 23-man squad which travelled to Seoul to face South Korea in the FIFA World Cup 2022 and…..

The game kicked off amid torrential rain and the water lodged ground signaled a tough battle for the players, especially the visiting Lebanon team.

Despite poor ground conditions it was the visitors who pilled the pressure on the home team. Sujan Perera was called to make saves early and Lebanon showcased excellent combinations on the field with Hassan Maatouk leading the lines.

Nader Matar dominated the midfield along with Adnan Haider as the Lankans were restrained in their own half for long periods.

In the 15th minute Harsha Fernando barged into Rabih Ataya inside the box and the Bahrain official pointed to the spot, justly. Hassan Maatouk converted the spot kick to put the visitors on the score board.

Lankan coach Nizam Packeer Ali brought in Sasanga Dilhara in place of Naveen Jude who was brought to the squad to replace Kavindu Ishan. The sudden change occurred as early as the 25th minute of the game. Jude was not included in the squad for the game against South Korea but was included in the starting eleven of this encounter.

The Lankans rarely came out of their own half and when they did they were penalized for off side offenses as the Lebanese played a high line in defense. Felix Melki was a tower in midfield and made sure nothing went pass him.

In the 37th minute, Lebanon found fortune in their second penalty of the game. Chalana Chameera was the sinner this time bringing down Rabih Ataya once again inside the box. Hilal Alhelwe converted to give a two-goal cushion to the Lebanese men going into half time.

Sri Lanka started the second half slightly better than the first. They were given a scare early in the half with Sujan Perera going down injured but Sujan shook it off and took his stance, much to the relief of the spectators gathered at the Race Course.

With the counter attacks, it was Sujan Perera who kept the Lankans afloat with couple of good saves. Meanwhile, an early substitution in the half saw Dilip Pieris being replaced by Mohamed Aakib in the 59th minute.

Soon after the substitution Aman Faizer had to be taken off injured and Sundaraj Niresh came in as the final substitution for the home team.

Sri Lanka got their first shot on target in the 65th minute which was a long-range effort and was easily saved by the Lebanese custodian.

Hassan Maatouk and Rabih Ataya could have easily increased the lead for Lebanon. However, their efforts drifted wide despite easy opportunities to find the back of the net.

Hilal Alhelwe then put the game, beyond doubt Lebanon’s way, with an excellently shot goal. He cut in from the right wing and slammed home from his left to the top corner leaving Sujan Perera short of answers.

With 4 more games remaining in the campagin, including 3 away matches, Sri Lanka needs answers and they sure need them fast to produce an overturning result.