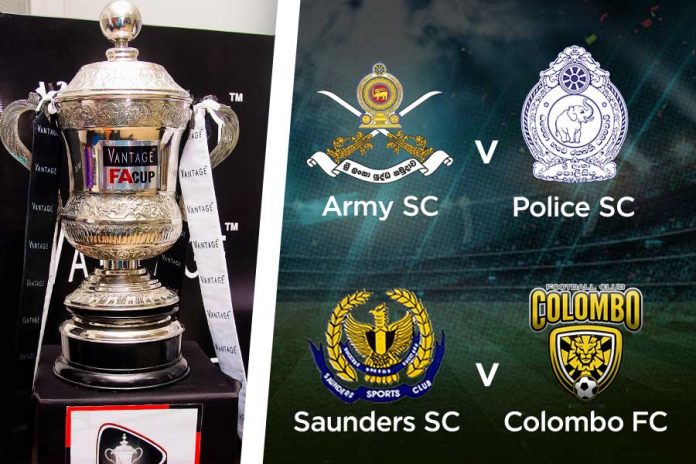 The Vantage FA Cup 2018 has reached its final four stage, with the matches set to take place on Sunday, the 25th of November at the Sugathadasa Stadium.

ThePapare.com takes a brief look into the history of the four clubs in the FA Cup and their road to the 2018 semi-finals.

Defending champions Army SC marched into the semi-final after they soldiered past SLTB SC in a 2-0 victory.

Kasun Pradeep and Mohamed Issadeen once again had solid performances while stand-in skipper, Bandara Warakagoda chipped in with a goal while putting on a stellar performance at the back. Army had an equally dominant performance in their Round of 16 encounter against New Star SC where they dominated 3-0.

Police SC meanwhile have had a tough road to the final 4, having put on a spirited performance as they defeated Negombo Youth 3-1 in the Round of 16. Police then faced the much-fancied Renown SC in the quarter-final where after a tough battle under heavy rain, the match ended 0-0 sending the game into penalties.

Goalkeeper Mahendran Dinesh, who had been having a great tournament so far, once again stepped up for his side making some crucial saves that saw his side progress into the final four.

Since the start, Police SC have made the final on at least 6 occasions, including the very first 3 FA Cups from 1948. Police won their only FA Cup so far in 2008, when they beat Civil Security SC 6-5 on penalties after a 1-1 draw in regulation time.

Police did not have the best of seasons in 2017 as they finished 17th in the Dialog Champions League points table and were relegated into Division I. This season however they seem to be fighting back hard as they have dominated their Division I matches so far, and done brilliantly to make it this far in this year’s FA Cup.

Saunders SC, the 15-time FA Cup Champions, dominated Eveready SC 6-2 in the Round of 16, before they clashed against Prison SC in the last 8. Prison SC proved to be a tougher battle than Saunders expected, but veteran Kasun Jayasuriya managed to get his side out of jail as he provided both goals in their 2-1 escape to the final 4.

Saunders have heavily relied on Kasun Jayasuriya in the tournament so far and if they want to take down the mighty giants of Colombo FC, they will need other key players to step up and perform.

Saunders used to be dubbed the ‘Kings of the FA Cup’, but in the recent past have failed to make an impact in the tournament, having last made a final back in 2007 losing to National United SC 3-0, and last winning in 2000/01. They made it to the semi-finals in 2017.

The defending Dialog Champions League Champions, Colombo FC defeated Java Lane SC following an epic comeback in the Round of 16, before facing off against New Youngs FC in the quarter-finals.

Colombo had a good outing against the Wennappuwa side but both teams failed to break the deadlock in regulation time, sending the game into penalties. Colombo held their nerve from the spot which saw them defeat New Youngs 4-1 to progress into the final four.

Colombo FC first took part in the FA Cup in 2009, but lost out in the fourth round. In 2010, Colombo FC, in Division III at the time, reached the Round of 16 where they lost 4-0 to Police SC. In 2014 and 2016 Colombo made the Semi-finals, but on both occasions, fell victim to eventual Champions Army SC.

2015 saw them make club history as they reached their first and so far, only FA Cup final against Blue Star SC, where they were crowned Champions after a 1-0 victory.