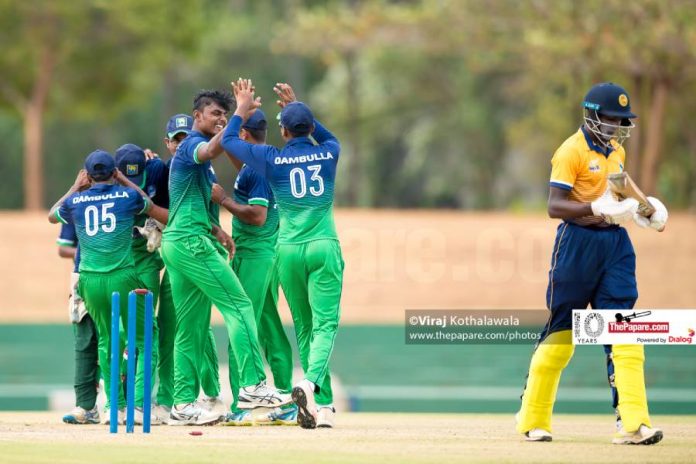 Final fixture of the group stage of the U19 Super Provincial Tournament was held today between Team Kandy and Team Dambulla at Rangiri Dambulla International Stadium.

Team Dambulla and current Sri Lanka U19 skipper Nipuna Dananjaya won the toss and decided to bat first in the virtual semi-final battle against Team Kandy to book a spot in the finals versus Team Colombo.

Dambulla openers got off to a flier as Leshan Amarasinghe and Supun Sumanarathne added 46 for the 1st wicket partnership in 6.3 overs, but both of them couldn’t covert it to a big score. One of the prolific run scorers of the tournament Ravindu de Silva too made a run-a-ball 32 but again was not able to play the long handle.

At one stage Team Dambulla were 1 for 87 and everything went haywire as 6 wickets were dismissed for just 31 runs. From being 118-6 and a spot in the final in line, Joes duo Lakshan Gamage and Ashen Daniel took the responsibility of taking the team to a respective total and succeeded.

The pair constructed a heroic 84 runs partnership to take Team Dambulla to 223 as Gamage labored to a half century and Daniel with a 71-ball 30. From the bowling front, Kavindu Nadeeshan starred with figures of 3 for 27 in 10 overs.

In the second innings from Team Kandy, top order failed to covert their 30s to a match winning effort as the required run rate raised from over to over until all-rounder and Sri Lanka U19 cap Avishka Tharindu turned into the savior mode to rescue Team Kandy from a difficult situation.

Tharindu played a gem of an innings; 64 from 54 balls as he dragged his team to the winning distance before he was trapped in front of wicket by left arm seamer Yasiru Gamage. Ultimately Team Kandy fell short of 7 runs as the tail-enders weren’t given a chance by Ashen Daniel.

Daniel picked 3 crucial wickets and Dilum Sudeera produced a exceptional spell of left arm orthodox bowling of 3-26 in 10 overs. With that win Team Dambulla clinched the 2nd spot in the points table and Dambulla U19s will play the final against unbeaten Colombo U19s.

Next match which is the 3rd place play-off, will be played tomorrow (22) at the same ground between Team Galle and Team Kandy. Watch Live action on ThePapare.com, Dialog Television Channel No.77 and Dialog MyTV from 9.30am onwards.