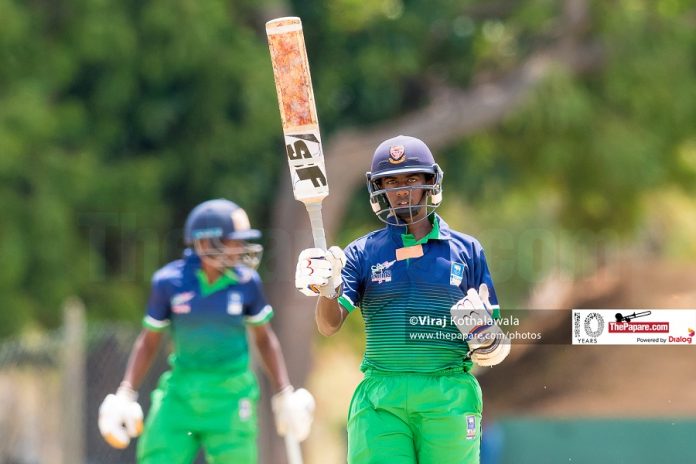 The 4th match of the U19 Super Provincial Cricket Tournament was held today between Team Galle and Team Dambulla at Rangiri Dambulla International Cricket Stadium.

Dambulla U19 skipper Nipun Dananjaya won the toss and decided to bat first in the crucial fixture and their top order responded well to the challenge as 2 of the top 3 made half centuries.

Supun Sumanarathne and Ravindu Rasantha constructed an excellent century partnership with scores of 56 and 53 respectively. Team Dambulla looked solid at 119-1 and were targeting for a big first innings total after the 21st over but, a flurry of wickets saw them at 4-135.

All-rounder who bowls off spin from Richmond College, Sandun Mendis and left arm seamer from Mahinda College, Navod Paranavithana were the tormenters to the Team Dambulla middle order as the pair shared 5 wickets among them.

Dunith Wellalage and Ashen Dilhara cleared the lower order of the opposition to restrict them for 223 inside 47 overs.

The reply was slow paced and steady till the 22nd over as Galle were solid at 2 for 79 chasing a lower score of 224. But the next 3 overs which created 3 wickets in a hurry suddenly turned the tables for Team Dambulla as they slotted in command.

Dunith Wellalage and Pawan Rathnayake tried to rejuvenate the chase with labored knocks of 31 & 54 respectively but departed in crucial moments. The only hope for Galle, Sandun Mendis played an exceptional and gutsy inning of 28-ball 37, but his dismissal in the penultimate over put the nails in the coffin for Galle.

Galle needed 8 runs in the last over, but Ashen Daniels held his nerves to deliver the final over to take his team to a win by 2 runs as Team Dambulla recorded their first triumph of the tournament.

Next match will be played tomorrow (20) at the same ground between Team Colombo who already qualified for the finals and Team Galle who desperately needs a win to make the top 2. Watch Live action on ThePapare.com, Dialog Television Channel No.77 and Dialog MyTV from 9.30am onwards.