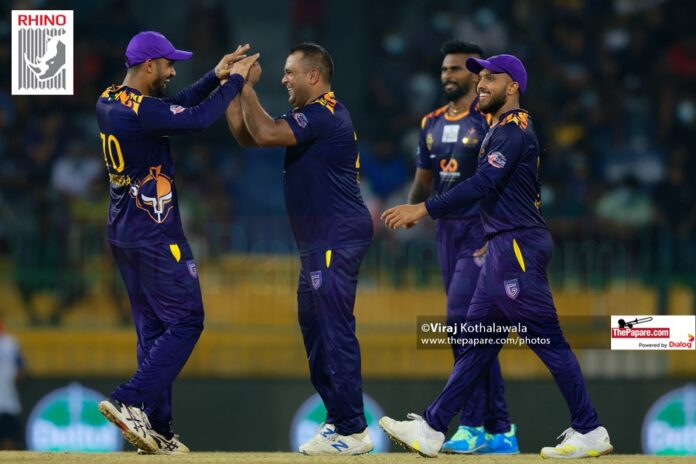 After being asked to bat by Jaffna Kings captain Thisara Perera, Galle lost their top three batters cheaply. Last year’s highest run-getter, Danushka Gunathilaka, skied one straight up after scoring 2 fours in the opening over. Kusal Mendis, playing his maiden game for Galle, too skied one up. The Jaffna Kings bowlers were right on top of their game when experienced Mohammad Hafeez fell for 15 as Galle Gladiators were 3 down for just 41 runs.

Gladiators skipper Bhanuka Rajapaksa, batting at number five, added the much-needed impetus to their innings with a masterful 56 off 31 balls with 6 fours and 3 sixes. He was involved in two crucial partnerships in the middle overs – 52 with Ben Dunk for the 4th wicket and 40 with Samit Patel for the 5th wicket.

Wanindu Hasaranga continued his purple patch picking up Dunk and Rajapaksa to end with figures of 21 for 2 from his 4 overs. After Rajapaksa fell, Patel took on the mantle of ending the innings on a high. He made 42 off 31 deliveries before being dismissed in the final over as Gladiators posted a match-winning 164 on the scoreboard. Young West Indian seamer, Jayden Seales was the pick of the bowlers for Jaffna, taking 3 wickets for 23 runs.

Chasing 164 runs to win, Jaffna Kings had no rhythm whatsoever in their innings as Galle spinners proved to be too strong to push away on a gripping surface. None of the top order batters made more than 15 runs for Jaffna as the Galle spinners had a feast at Khettarama. Hafeez was the most economical bowler, giving away only 11 runs from his 4 overs. He dismissed both the Jaffna openers – Rahmanullah Gurbaaz and Upul Tharanga.

England all-rounder Samit Patel contributed with the bowl as well, capturing 3 wickets for 21 runs in his 4-over spell. Skipper Rajapaksa rotated his spinners well as Kings were bowled out for just 110 runs. Wahab Riaz, the Abu Dhabi T10 championship-winning captain, batting at number 8 made some lusty blows, scoring 27 off 20 balls. However, it was too little, too late for Jaffna as they succumbed to their first-ever defeat at the hands of Galle. Jaffna Kings (formerly Jaffna Stallions) won all their 3 fixtures against Galle Gladiators last season.

On the second matchday, tomorrow (6th December), Dambulla Giants will play Kandy Warriors in the afternoon (3.00 pm local time) and Colombo Stars will take on Galle Gladiators in the evening (7.30 pm local time).