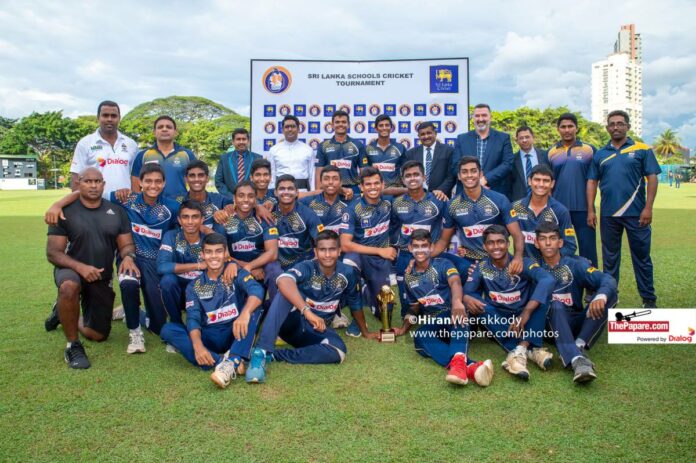 St. Peter’s College, Colombo emerged champions of the U19 Inter Schools Division 1 Tier ‘B’ Limited Overs Cricket Tournament as they beat Thurstan College, Colombo by 6 wickets in the final of the tournament played today (04th December) at Colts Grounds, Colombo.

However, thereafter there was no significant partnerships from Thurstan’s batting lineup as they were restricted to just 114 runs. The Peterite bowlers were right on the money with the ball putting pressure on the opposition batters throughout the innings.

Vishen Helambage and Lashmika Perera were brilliant with the ball for St. Peter’s College as they shared 7 wickets between them.

In reply, St. Peter’s College got off to a good start thanks to a brisk opening stand set by Oween Salgado and Vishen Helambage. The duo added 51 runs off 43 balls for the first wicket which set the tone for the Peterite victory.

The skipper Gunawardana and Salgado also added a vital 47-run stand for the 3rd wicket as St. Peter’s College comprehensively chased down the target of 115 in the 22nd over with 6 wickets in hand. With this win, unbeaten St. Peter’s College registered their 2nd consecutive Tier ‘B’ title as they won the championship in the last edition as well.

The opening batter Salgado top scored with a knock of 39 runs off 53 balls with 6 fours while the skipper Gunawardana was the next best performer with the bat for victorious St. Peter’s College as he made an unbeaten 31 runs off 41 balls with 3 sixes.