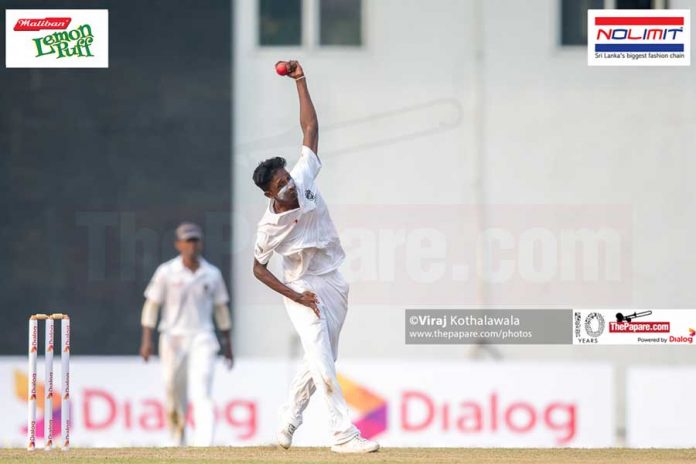 The Mazenodians won the toss and opted to bat first at the home turf against the boys from Bambalapitiya. Wizard-like bowling of Kanishka Maduwantha made the stay hard for the home batsmen as they perished for 92 runs in the first-innings. Maduwantha picked up 6 wickets for 27 runs with his crafty left-arm spin.

Rubbing salt on the wounds of the hosts, the visitors scored 276 runs in their first-innings. It was a collective effort by the Peterites as Wanuja Kumara (52), Bhanuka de Silva (51), and Shenal Boteju (50) all scored half-centuries. Shenash Fernando of De Mazenod College was in the spotlight with ball in hand as the left-arm spinner bagged five wickets for 71 runs.

Maduwantha was harsh on the Mazenodians again as the senior-most spinner of St. Peter’s College wrote a 10-wicket haul to his name. De Mazenod were bowled out for 117 runs in the second-innings as St. Peter’s College recorded victory by an innings and 67 runs.

Amitha Dabare helped D.S seal a 5 wicket win against St Aloysius in this traditional encounter at the Galle International Stadium.

St. Aloysius’ College won the toss and chose to put runs on the board first. Kavindu Dilhara played a good hand, holding up one end and scoring an unbeaten 75 runs. His efforts were not supported by his fellow teammates as the team was shot out for just 130 runs. Amitha Dabare led the bowling with 4 wickets to his name.

Amitha did not want to give the limelight away to anyone else even with the bat. The right-hander top-scored for D.S with 75 runs while he was well complemented by Maneendra Jayathilake who made 54 runs not-out. Seamer Niduka Malsith was the pick of the bowlers for the hosts as he picked up 4 wickets.

The 2nd innings effort from St. Aloysius’ College was even poorer than their 1st as they were bundled out for 117 runs. Skipper Muditha Lakshan came to the party with 4 wickets in this innings to make it a complete bonanza for the boys from Colombo 07.

A simple target of 43 runs was set for the visitors but they made it look like a tough one by giving away 5 wickets before crossing the line.

The group C fixture turned out to be a low-scoring thriller at Uyanwatte as the young and exciting Devapathiraja outfit bounced back from a pit they dug for themselves to secure first-innings points against the Matara school at their home venue. This is the second first-innings win for the Rathgama school.

Winning the toss and batting first, the visitors were undone meekly for 93 runs. Right-arm offie, Keshara Nuwantha bagged six wickets to be the star of the innings.

Devapathiraja fought back courageously to bring themselves back into the game by bowling out the hosts for just 78 runs. Irushka Thimira recorded a fifer to keep his school out of danger.

Following a heavy defeat against the Trinitians, Lumbini College travelled South to play Richmond College at Sooriyawewa. The sufferings weren’t over for Lumbini with the ball as Bhanuka Manohara and Sandun Mendis had no trouble in the middle for the hosts. Manohara scored an elegant ton while the skipper Mendis departed with a well-made 83 runs. Richmond College posted 249 runs for their first-innings. Ramesh Madushanka recorded a fifer to keep the spirits up for Lumbini College.

Lumbini were struggling at 108 for 7 in their reply by close of play. This could possibly end in another thumping defeat for Lumbini College if they do not fight back strong from this point.