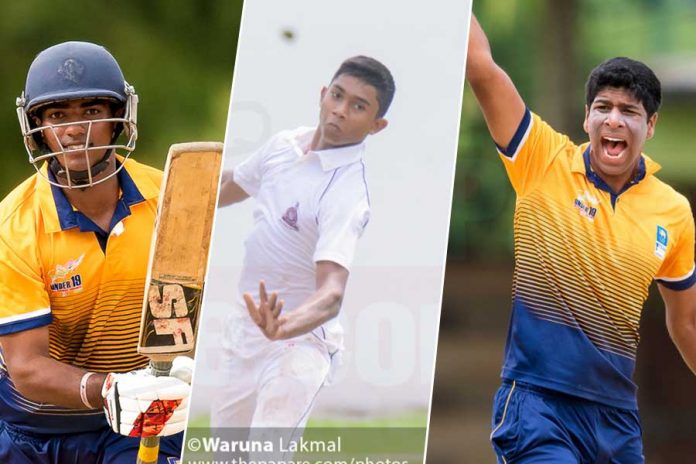 The U19 encounter played between Nalanda College and Trinity College for the Mahela-Sanga Challenge Trophy commenced today for the second time. The Nalanda College skipper Avishka Perera won the toss and chose to bat first at Asgiriya International Stadium in Kandy.

However, the decision backfired as the visitors were bundled out for just 82 runs in 27.5 overs. Mahima Weerakoon (25) and Raveen De Silva (24) were the chief contributors with the bat. The Trinity College skipper and right-arm seamer Ruvin Peiris was the pick of the bowlers for the hosts as he took 5 scalps for just 32 runs. In addition to this, the off-spinner Abhishek Anandakumar chipped in by taking 3 wickets for 25 runs.

In reply, Trinity batsmen showed a better batting display and managed to go past Nalanda’s first innings score, putting up 214 runs in 57 overs. The right-handed stroke maker Abhishek Anandakumar who impressed with the ball earlier in the day, stroked 60 runs while Deemantha Bandara contributed with a knock of 49 runs for the hosts.

Sri Lanka U19 cap leg spinner Raveen De Silva picked up 4 scalps for 101 runs, while Chamodya Rajapaksha grabbed 3 wickets for 46 runs for the lads from Colombo. The visitors began their second innings 132 runs behind and ended the first day’s play on 17 for 1. The match will continue tomorrow for day two.

The Group A encounter between Gurukula College and Devapathiraja College commenced today at MRICS in Hambanthota. The Gurukula College skipper opted to bat first after winning the toss, but the lads from Kelaniya managed to post only 127 runs on the board.

Rashmika Mewan (43) and Likshan Sasanga (30) top scored for the visitors. Sudeera Weerarathne was the pick of the bowlers for Devapathiraja as he picked up a 5-wicket haul for 50 runs. Irushka Thimira gave him good support at the other end taking 3 scalps for 34 runs.

In reply, the Devapathiraja batsmen also struggled with the bat as they lost 6 wickets for just 64 runs at the close of play on day one. Sasith Ashan and Thushara Sankalpa picked up 3 wickets each for the lads from Kelaniya.