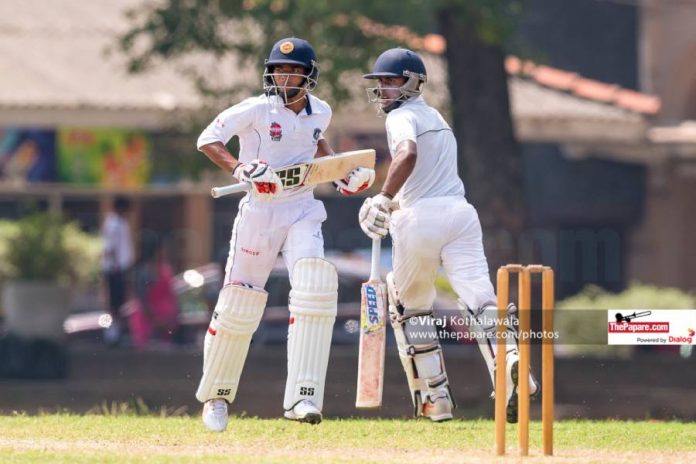 Dunith Wellalage smashed the living daylights out of the Isipathana bowlers at Park Street in the group A fixture, earning a massive win to his alma mater. Isipathana College won the toss and inserted the Josephians to bat first. The boys from Darley Road were quick to make the host regret their decision as they piled up a mammoth score of 402 runs. Wellalage was outstanding with the bat as the southpaw smacked 196 runs to record his season’s best score. The rest of the team batted around him as the next best score was the 44 made by the young Sadeesh Rajapaksha. Savindu Uthsara did the consolidation work with the ball, as the left-arm spinner picked up a fifer.

The Pathanians were never in the contest as they were bowled out for 228 runs in the first-innings. Opener Thevindu Dickwella scored a fifty and failed to convert it in his usual fashion. None of the other batsmen really showed any intent at the crease. Isipathana College could not gain any momentum in the game. The Josephian spinners were right on the money. It was Wellalage again who stole the spotlight, bagging 3 scalps for 44 runs. His partner in crime, Miranga Wickramage, bowled well in tandem with him as he also earned 3 wickets with his left-arm spin.

Following on, Isipathana was dismissed cheaply for 65 runs. Miranga Wickramage  was the main assassin as he wrote 6 wickets to his name. Wellalage and the third left-arm spinner in the team Shalinda Seneviratne, picked up 2 wickets each to wipe the Pathanians out of the game.

The game was played at the St. Sebastian’s College Grounds, where the host won the toss and decided to bat first. The visitors did a decent job to keep the host down for 274 runs for 9 wickets in 55 overs. Left-handed top-order bat Sukitha Prasanna scored a patient 56 runs holding the Sebastian’s innings together. Opener Nishitha Abilash also scored a half-century in a hurry and departed early. The Under 15 players of St. Joseph Vaz College who made it to the first XI team led the bowling for St. Joseph Vaz, as medium paceman Vishwa Rajapaksha and left-arm spinner Menusha Perera bagged 3 wickets each.

In reply, St. Joseph Vaz College played their tactics right has they earned first-innings points against the host by planning their innings out correctly. Though they looked troubled at the start, young Vishwa simply batted them out of danger and took the game away from the Bastians. The right-handed player made a gritty 121 runs as his team ended the game on top.

St. Anne’s College hosted the boys from the hill country in this group B fixture. Skipper Kavindu Ranasinghe won the toss and decided to bat first. The skipper and his deputy partnered up in the massacre of the Kandy school, as the duo recorded centuries each. Yasitha Samararathna and Upendra Warnakulasooriya picked up 3 wickets each for Dharmaraja College. The Kurunegala school scored 331 runs for the loss of 9 wickets and declared their innings.

In reply, Dharmaraja scored only 112 runs for the first-innings, None of the batsman made over 30 runs for Dharmaraja while the off-spinner, Manaan Musammil picked up 4 wicket to top the bowling for Dharmaraja. The follow-on was enforced and there on the game was just a formality.