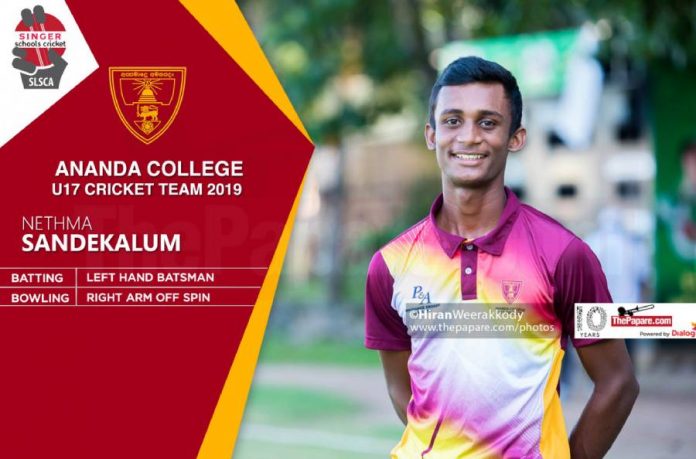 Several games of the Singer U19 Division 1 Cricket Tournament 2019/20 were played today, 1st October, across the Island.

After an authoritative day-one, the Devans looked comfortable in the morning session today. Ananda College started the day at 13 for 1 and made amends for their early mishaps gradually. With Nethma Karunarathne doing the bulk of the remedy they ended at 269 for 9 when they declared. Karunarathne scored a fighting 120 runs. Matheesha Weerasinghe’s 3 for 59 was the pick of the bowling for the Devans.

Maliyadeva College batted out 10 overs in their second-innings and was at 30 runs for 2 wickets when the weather forced the game to a close.

Starting the day with a crisis at hand Lumbini College was at 6 runs for 4 wickets at the beginning of the day. They had won the toss and elected to field first on day one. Isipathana College scored 218 runs for the first-innings and had sent back the entire Lumbini top order back to the hut the previous day.

All-rounder Thashika Nirmal joined his skipper Sohan Dilshan to apply the brakes on the wickets column. Thashika scored 85 runs to make this game a memorable one following his fifer yesterday. Sohan struck a fifty to give Lumbini some cushion in the game as they ended the innings at 191 runs. The game ended in a draw.

Moratu Maha Vidyalaya hosted St. Joseph Vaz College in a traditional fixture at Moratuwa. They won the toss and elected to bat first, only to result in woes.

Left-arm spinner Tharusha Fernando picked up 4 wickets for 11 runs while the skipper, Nipun Dhananjaya bagged 2 scalps. The home team couldn’t make any impression with the bat as they were bowled out for 112 runs.

Mahinda College and Dharmapala College are locking horns in a traditional match in Pannipitiya. The visitors won the toss and elected to bat first. It was a tough outing for the boys from Galle as they ended the day at 138 runs for the loss of 7 wickets. Kaushitha Kodithuwakku top-scored for Pannipitiya with 42 runs. Lakshitha Purasinghe bagged 4 wickets for 32 runs for Dharmapala College.