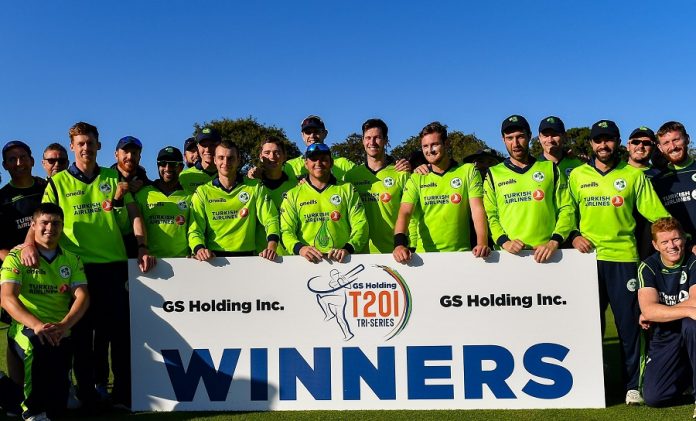 Ireland clinched the Twenty20 tri-series after a dramatic single-run victory over Scotland in Dublin.

In a tense climax, Scotland needed three runs from their last ball but managed only two off a delivery by Shane Getkate.

Ireland bounced back after having been defeated by the Netherlands on Wednesday.

Kevin O’Brien top-scored for Ireland with 63 while Gareth Delany hit 25.

Richie Berrington made 76 for Scotland with seven fours and five sixes, while Matthew Cross hit 66.

After a spirited fightback from Ireland’s bowlers, it all came down to the final delivery, with Scotland needing three, only for Craig Wallace to come up shy with his attempted scoop shot to give Ireland a last-gasp victory at Malahide Castle.

The manner of Ireland’s win was a fitting end to a dramatic week which saw Sunday’s opening game rained off without a ball being bowled.

Ireland regrouped to beat Scotland by four balls with 14 balls to spare on Tuesday before falling to a Ben Cooper-inspired Dutch side on Wednesday.

It was despair for Scotland after their convincing victory over the Netherlands had set up Friday’s decider at Malahide.