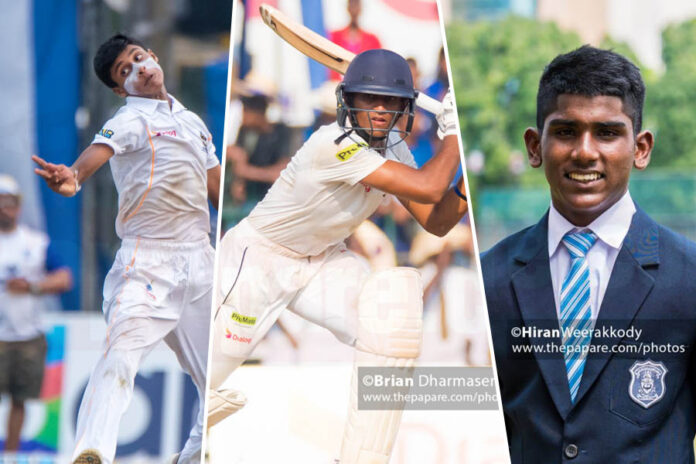 One game of the Division 1 Schools U19 Cricket Tournament – Tier A was played today (19th March), while two games in Tier B were also worked off. Four other traditional matches were also played around the Isle.

The only Tier A game played today between Nalanda College and St. Anthony’s College ended without a result as rain interrupted the play in the latter stage of the game. However, as per the rules of the tournament, both teams were awarded 2 points each.

Result – No Result (2 points awarded to each team)

Sandun Madushanka of St Aloysius’ College was the star performer of their win against Moralians as he bagged 4 wickets for just 14 runs with the ball. Sadeepa Halangoda led the charge with the bat for St. Sylvester’s College, scoring a half-century, while Charith Samuditha (3/14) and Akila Nimsara (3/16) shone with the ball in their victory against Lumbini College.

The traditional encounter betweeen Ananada College and S. Thomas College ended in a draw, with the latter taking the major honors thanks to the excellent century stroked by Ryan Fernando (127).

The other traditional encounter held between Trinity College and St. Peter’s College also ended in a draw, but St. Peter’s College had the upper hand throughtout the match. The left-arm seamer Danal Hemananda, who picked up a match bag of 7 wickets for 76 runs, was the standout performer of the day for the Peterites.

Shevon Daniel of St. Joseph’s College had a great outing with the bat today as he made an unbeaten 134 runs against Wesley College.

Groups for the Schools U19 Cricket Tournament 2020/21 announced