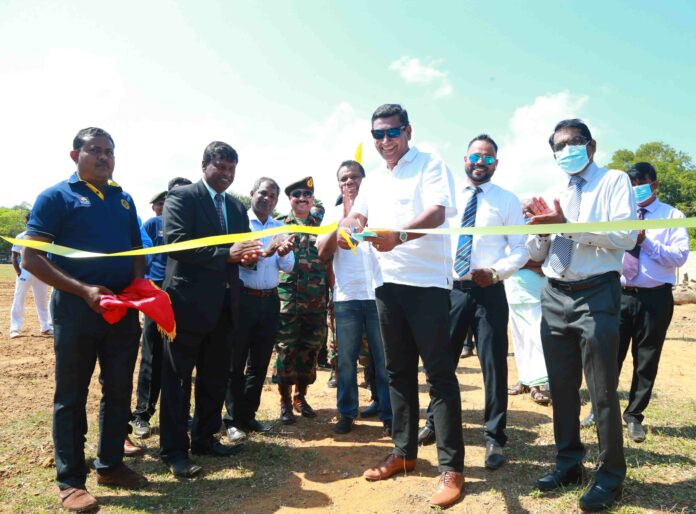 The Mallakam Sri Baskaran Cricket Ground in Jaffna, built under the patronage of Sri Lanka Cricket, was declared open on Sunday (14th March 2021) with the participation of Mr. Ravin Wickramaratne, Vice President of Sri Lanka Cricket, and Mr. K. Mahesan, the District Secretary of Jaffna, who was the Chief Guest of the event.

The ground built under the Cricket Gamata Program of the SLC was developed in a land donated by Late Mr. P. Sri Baskaran, a prominent philanthropist who lived in the area. Late Mr. Baskaran’s wife also attended the opening ceremony.

Two ‘Side Practice Wickets’, a Matting Wicket, an Office Room and a Player Changing Room are facilities built under the 1st phase of the ground development.

The completion of the 3 phase development program by the end of 2022 will transform Mallakam Ground into a fully-fledged National Cricket Ground with facilities such as Center Turf Wickets, a Pavilion, Player Dressing Rooms, Gymnasium, a Score Board, a Sight Screen and also facilities for Indoor Cricket.

The Mallakam Cricket Ground is managed by the Jaffna District Cricket Association, and the 26 cricket clubs and 16 Schools playing cricket in Jaffna will immensely benefit from the new ground.