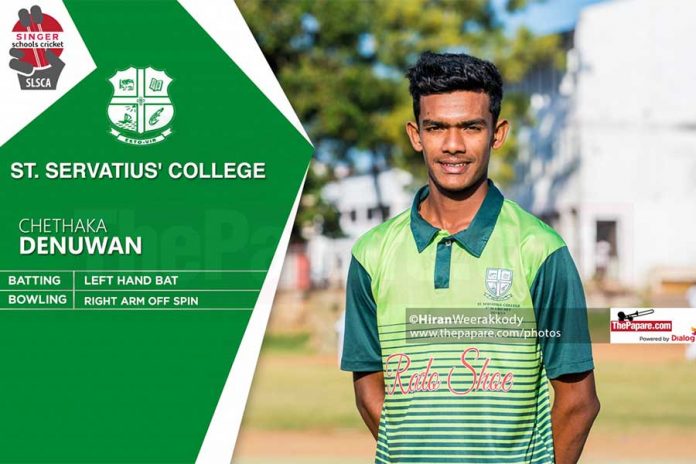 Richmond College won the toss in this traditional encounter at MRICS Hambantota and opted to field first. Chethaka Denuwan led batting for the Matara school as they ended the day in a comfortable position. Denuwan smashed 116 runs in style as his team posted 255 runs for the loss of 5 wickets by sunset on day one.

Kavindu Nirmana was the pick of the bowlers for Richmond College as the right-arm seamer bagged 3 wickets for 58 runs. A frustrating outing for the Richmondites in the baking sun at Hambantota came to an end with them having to bowl 92 overs before the umpires took the bails off.

The traditional game hit the roads at Thurstan grounds in Colombo with the visitors winning the toss and deciding to take first lease of the crease. It was a poor patch of play from Lumbini batsman as they succumbed for just 64 runs. Left-arm spinner Punthila Kumara, opening bowler Avishka Kaushalya, and seamer Bawantha Jayasinghe all picked up 3 wickets each to placed Lumbini College batting in disarray.

Thurstan in reply didn’t have a first-rate outing either. They were shot out for 130 runs, courtesy fifer of Thasika Nirmal. Savinda Prabashana too was destructive as he claimed 3 scalps to his name.

The second outing was quite satisfying as Lumbini boys looked comfortable at 80 for 2 by close of play.

The Kalutara school is hosting the boys from Kelaniya in this traditional encounter at their home grounds. Winning the toss and batting first, Gurukula College posted a moderate total of 199 runs in half-a-days play. Janitha Shehan (36) and Praveen Nimesh (35) were the only batsmen who made a noteworthy contribution for Gurukula. Sri Lanka Youth International representative Rohan Sanjaya picked up 6 wickets for 80 runs to top the bowling card.

The home team in reply was bowled out for 139 runs. Yet again it was the flag bearer of the school, Rohan Sanjaya who fought the battle alone scoring 65 runs for no avail.

The clash between these two Group C teams unfolded at the Bloomfield grounds in Reid Avenue today. Mahanama College stamped authority in the game very early as they got rid of the boys from Wattala in 42.2 overs into the game. Pawantha Weerasinghe and Danuka Nirmana bowled well in tandem for the Black and Gold team as the duo registered 3 wickets each. The Antonians were bowled out at 116 runs in their first innings.

Mahanama was quick to rack up the points on offer as they piled up at 189 runs in the remaining 50 overs of the day. Pavan Rathnayake smashed a half-century in no time, while the spin duo of St. Anthony’s College, Romesh Suranga and Kaveesha Dulanjana walked away with 2 wickets each.

Dulaj Ashen and Ayon Hesara set the platform right for the Sebastianites to go for an outright win in this traditional encounter. The pair boosted St. Sebastian’s College to 270 runs batting out 111 overs. Sineth Sithara was the pick of the bowling for the Thomians with 4 wickets under his belt.

The Thomians were stranded in the game as they were undone cheaply for 105 runs where Sithum Akilanka starred with 6 wickets to his name. The Matara school was down 8 for 92 runs and were saved from total humiliation thanks to some resistance from the tail-end batsmen.