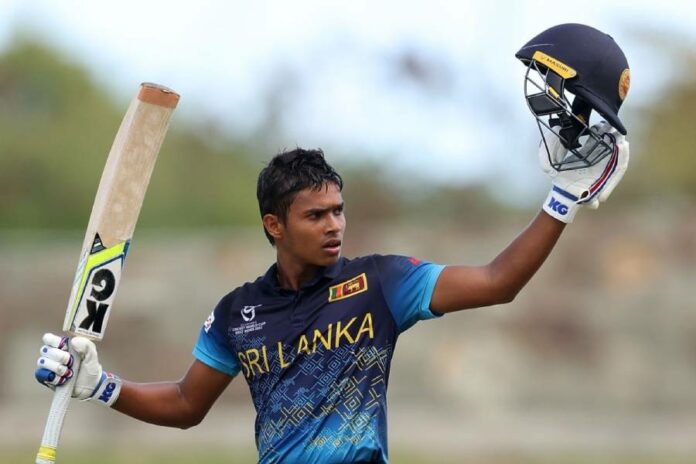 Having won the toss, Sri Lanka U19s skipper Dunith Wellalage decided to take first lease of the wicket, opting to bat first. Sri Lanka had made one change to their playing XI as they brought in spinner Wanuja Sahan replacing speedster Yasiru Rodrigo.

Sri Lanka got off to a disastrous start with the bat, losing 3 top order batters inside the first powerplay for just 30 runs. But skipper Wellalage and Ranuda Somarathne built a match defining partnership of 130 runs off 139 balls for the 5th wicket, rescuing the Sri Lanka innings to 232 for 6 in the allotted 20 overs.

Wellalage stroked a brilliant century, becoming the first Sri Lanka U19s captain to score a hundred in U19 World Cup history. Wellalage’s knock of 113 runs came off 130 balls with 9 fours and 4 sixes. Somarathne also chipped in with a crucial knock, smashing unbeaten 57 runs off 70 balls with 3 fours and 2 sixes.

Chasing 233 runs to win, South Africa lost 2 early wickets inside first 7 overs putting them on the back foot. Sri Lankan spinners capitalized on the good start as they continued to turn the screws on the Proteas batters and managed to pick up wickets at crucial junctures.

A clinical bowling effort from the whole unit helped Sri Lanka restrict the Proteas to 167 and registered a thumping 65-run win to secure their place in the 5th place Play-off final of the tournament.