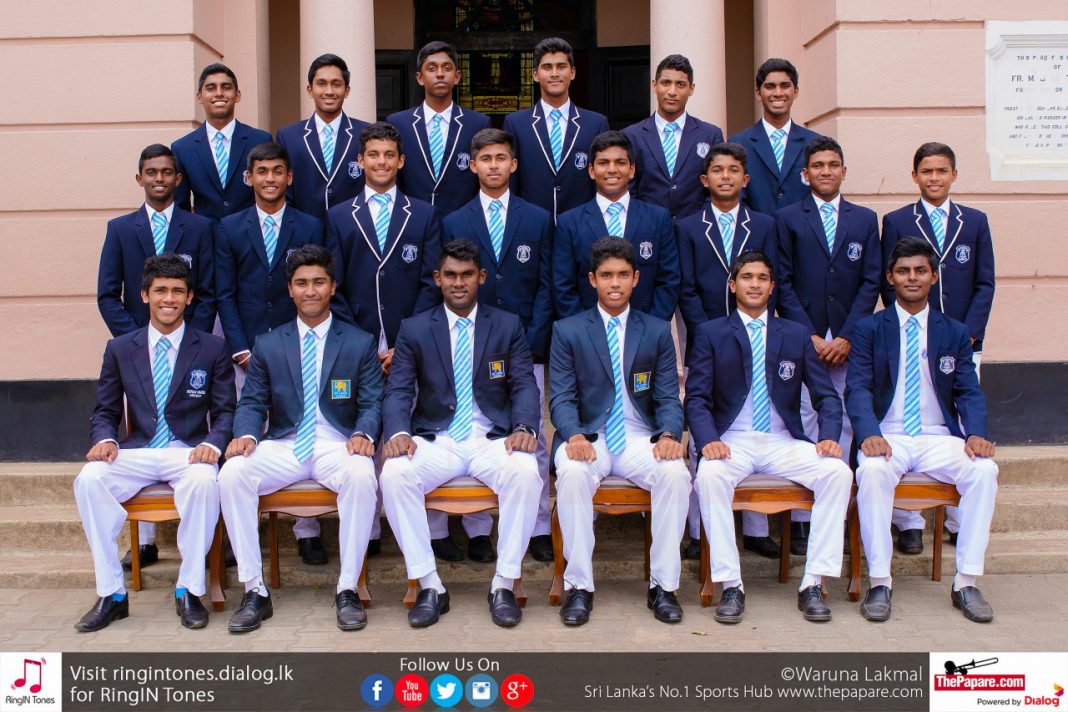 On 9th May 2018 another championship was added to the St. Joseph’s College, Colombo 10 trophy cabinet in the Rector’s Office, when they were crowned Singer Under 19 Division 1 Cricket champions for the 2017/18 season after defeating Trinity College, Kandy on first innings in the final at Colts Cricket grounds.

Prior to this accomplishment, in the last decade or so, St. Joseph’s College had won only two championships in the U19 category. In the 2006/07 season, under off-spinner Rajeewa Weerasinghe’s captaincy, St. Joseph’s College was crowned the ‘All Island Schools Best Team’ after they won 6 outrights (U19 knockout phase in the two-day format was introduced only three seasons ago) and in 2011, Roscoe Thattil guided the Joes to the All Island 50-over championship as they beat Trinity College in the final.

Apart from winning championships, what is perhaps most impressive is that, in the recent past, St. Joseph’s College have been able to produce plenty of players who have gone on to represent Sri Lanka including Angelo Mathews, Thisara Perera, Dimuth Karunarathne, Roshen Silva and Sadeera Samarawickrama.

How did St. Joseph’s College manage to lift the trophy this season? It is completely due to the sheer hard work, never-ending commitment and exceptional team spirit of the entire squad, coaching staff and the school authorities together with the Cricket Advisory Committee.

While being victorious at the end of the Singer U19 tournament this season, which lasted more than eight months, St. Joseph’s also managed to bring back some important silverware, laying claim to the Rev. Fr. Peter Pillai Shield after three years by beating their arch-rivals, St. Peter’s College in the 44th Josephian-Peterite limited overs encounter in March.

When the season started off in September last year, none of the cricketing pundits predicted St. Joseph’s College would end up winning the tournament, but skipper Jehan Daniel was always optimistic about their chances.

“We believed in ourselves always. We practiced hard and smart – day in and day out to have such a successful season. We had a plan of becoming the best team from the start and I’m ever grateful to everyone involved in St. Joseph’s College Cricket for helping us achieve that target.”  Daniel stated.

The boys from Darley Road won only three matches outright in the tournament; against De Mazenod College, Zahira College and Ananda College and also registered comprehensive victories against St. Patrick’s College and DS Senanayake College, two of their annual fixtures/non-tournament games, but most importantly remained unbeaten.

After the league phase was completed in February, the Josephians entered the knockout stage as the third-ranked team from group D below Mahinda College Galle and S. Thomas’ College, Mount Lavinia, to whom they lost on first innings.

The business end, the knockout phase, dragged on forever due to numerous reasons. They stunned last year’s runner-up and favourites, Richmond College in Galle on February 22nd and 23rd in their pre-quarter fixture.

During the quarter-final match against St. Sebastian’s College, Moratuwa on 15th and 16th March, St. Joseph’s College were clinical in brushing aside their opponents. Afterward, in the final four stage, Mahanama College gave Daniel and his team an almighty scare in the first week of April, but the Joes marched on. After more than a month’s break, they confronted the Trinitians in their final hurdle.

The three final-year players, Captain Jehan Daniel, Vice-Captain Nipun Sumanasinghe and Revan Kelly were instrumental to Josephian victories on many occasions. All three represented Sri Lanka U19s last year but only the captain was off on national duty this season.

While Daniel was unavailable for most of the matches, Sumanasinghe led well and maintained the unbeaten run, notching up a couple of wins. Daniel is a player who loves performing in the crucial games such as the ‘Big Match’ and ‘Finals’ and although he only played 10 games during the season, he averaged over 50, scoring 653 runs.

“In the last two years, Jehan (Daniel) has tremendously improved his batting skill because his temperament, concentration, and everything has come through. Whenever he was available to play for College, he shouldered the responsibility and played well which allowed the others to rally around him. “ Head Coach Roger Wijesuriya said.

Left-handed duo Kelly and Sumanasinghe set a new Schools record, the highest partnership for any wicket – 314 runs against Wesley College, which speaks volumes of their ability to score big runs.

Kelly was by far the best batsman amongst all schools this season accumulating 1287 runs in 35 innings at an average of nearly 40. He scored 3 centuries and 6 half-centuries while Sumanasinghe made 943 runs in 25 innings at 42 with 2 tons and 4 half tons.

The biggest secret to the Josephian success this season was the contribution of their youngsters. They played like seasoned campaigners, they played with passion and they knew how to win games.

“The three youngsters (Dunith, Lakshan, and Ashain) were phenomenal this season. More than the contribution of the senior players, the most satisfying factor was how these three performed beyond our expectations.” Wijesuriya further stated.

15-year old Dunith Wellalage was a revelation with both bat and ball. Sri Lanka U15 skipper Wellalage, playing his first season for the Joes 1st XI, ended up as the highest wicket-taker, capturing 84 wickets with his left-arm spin including six five-wicket hauls and also added a vital 687 runs in the lower middle order including 1 century and 3 half-centuries.

All-rounder Lakshan Gamage was not a regular until this season. He rose to the fast-bowling all-rounder’s position perfectly with his power-hitting down the order in 2017/18, smashing over 800 runs and capturing 52 wickets.

Wellalage and Gamage rescued St. Joseph’s on many occasions with their batting, putting together decisive stands against Mahinda, Royal, Lumbini and S. Thomas’ after their front-line batsmen had departed quickly.

Off-spinner, Ashain Daniel, another first-year player, was a treat to watch with the ball, his sharp turners troubled many young batsmen as he ended up taking over 70 wickets with four five-wicket hauls.

The 2017/18 Josephian outfit will be remembered in the years to come as a well-knitted unit not known just for their individual names or performances but for the way they played as a team.