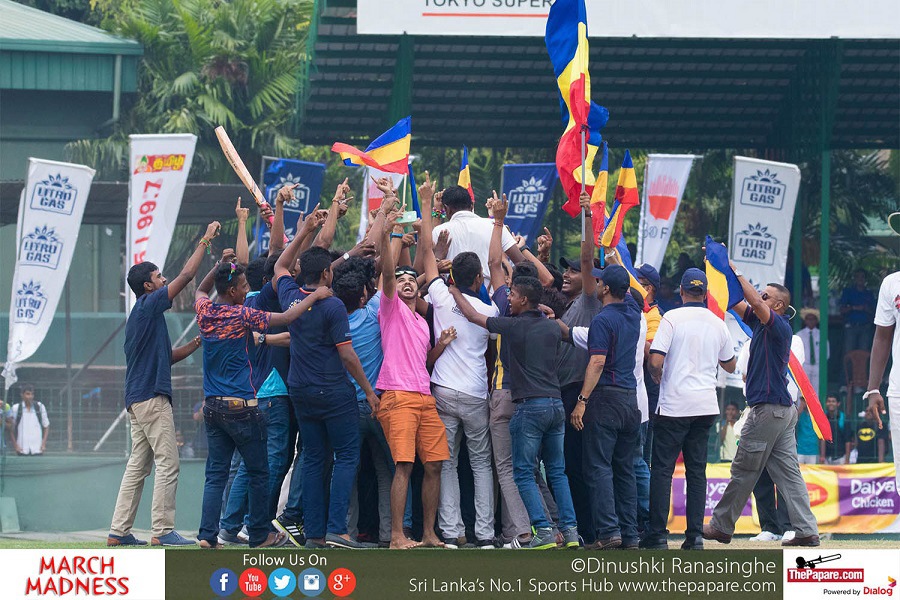 Charana Nanayakkara and Naveen Gunawardena almost brought the Blackham Wijewardene Memorial Trophy back to Thurstan College as Isipathana College escaped from an outright win in the 54th Battle of the Brothers which ended in a draw today (Saturday) at SSC grounds.

Chasing 219 runs in 55 overs for victory, Isipathana College were tottering at 68 for 6 in 26 overs in the fourth innings of the match. Earlier in the first session on day one, Isipathana resuming their first innings on 78 for 3 were bowled out for 141.

Thurstan-Isipathana heading for a tame draw

The 2017 ‘Big Match’ season started today at SSC grounds with the 54th edition of the Thurstan-Isipathana cricket encounter..

Skipper Sanjula Abeywickrama made a fighting 27 off 50 balls to top score for the lads from Havelock Town while left-arm spinner Naveen Gunawardena and fast-bowler Charana Nanayakkara shared 9 wickets for the Thurstanites. Gunawardena picked up 5 for 33 bowling 16.1 overs while Nanayakkara took 4 for 71 in 19 overs.

The Isipathana procession started when overnight batsman Pathum Nissanka fell in the very first over on day two as Nanayakkara struck gold early and a couple of overs later, Nanayakkara struck again when Ayana Siriwardena was caught plumb in front for 13.

Gunawardena was too tough to handle for the tail as the Isipathana first innings was wrapped up inside 45 overs.

With a 87-run first innings lead, Thurstan managed to post 131 for 7 in 34 overs in their second innings. Nanayakkara who made a vital half-century in the first innings once again starred with the bat scoring 55 off 67 deliveries with 8 fours to his name. For Isipathana, Neranjan Wanniarachchi and Ayana Siriwardena picked up 3 scalps each.

Gunawardena and off-spinner Thushal Madushanka made life difficult for Isipathana batsmen sharing five wickets as Isipathana held onto a draw in an exciting game of cricket which grew to be a crowd-pleaser at the end.