At the 3rd Youth Olympics Games 2018 (YOG 2018), which was held in Buenos Aires, Steeple Chaser, 17-year-old Parami Wasanthi Maristella of Kuliyapitiya Central College claimed the unbreakable record of becoming the first Sri Lankan to win a Youth Olympic medal as she brought home the bronze in the Women’s 2000m Steeple chase.

Young Parami’s medal at YOG 2018 ended a global medal drought for athletics in the country that has lasted over a decade. The last time Sri Lanka featured on the podium was in 2007 where Sri Lanka’s sole female Olympic medalist Susanthika Jayasinghe won Bronze in the Women’s 200m at the IAAF World Championships which was held in Osaka, Japan. Parami’s bronze medal also ranks as the third Olympic victory for the country behind Duncan White’s medal in 1948 London Olympics and Susanthika Jayasinghe’s Silver at the 2000 Sydney Olympics.

Hailing from the coastal fishing village of Ambakadawila in Chilaw, Parami is the youngest of three siblings and has an older brother and sister. Parami’s parents Antony Tudor and Rita Margaret have been tremendously supportive parents to their kid’s aspirations, be it in sports or studies despite struggling to make ends meet with the limited income that is generated through Parami’s father’s fishing. 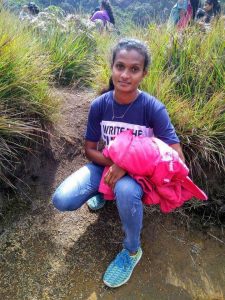 Parami’s sister Nishanthi Dilhani was the first to take up competitive athletics in the family. Attending Kuliyapitiya Central College, Nishanthi made a name for herself having notched up victories in All Island Schools events. Young Parami, who was studying at Ambakadawila Central College at the time, would race her sister Nishanthi at the beach, a practice that laid the initial foundation for her introduction to athletics. In late 2015, Parami who was then trained by Ms Damayanthi at Ambakadawila Central College caught the eye of Janith Jayasinghe, the coach behind Nishanthi’s success in the school arena. In February 2016 Parami joined Kuliyapitiya Central College where her journey in athletics really took off under the watchful purview of coach Jayasinghe.

“Nishanthi Dilhani, Parami’s sister also excelled in athletics, Parami always used to run behind her sister in the beach I think that’s where the foundation for her athletics was laid. Nadeesha is now studying sports management at the Sabaragamuwa University”, Parami’s mother, Rita Margrett said. However, despite having a promising career, Nishanthi chose academics over athletics due to the financial constraints that her family faced.

At Kuliyapitiya Central College, Parami wasted no time in springing to the spotlight. She excelled in all the junior competitions locally in 2016 which earned her qualification to compete at the 6th Children of Asia International Sports Games, which is also known as the mini Olympics for Children in Asia. At this event, Parami’s very first international competition, she managed to win Silver in the 2000m steeple chase despite running barefoot with only a few strappings protecting her toes. She also was a member of the 4X400m team which won Bronze at the same competition. 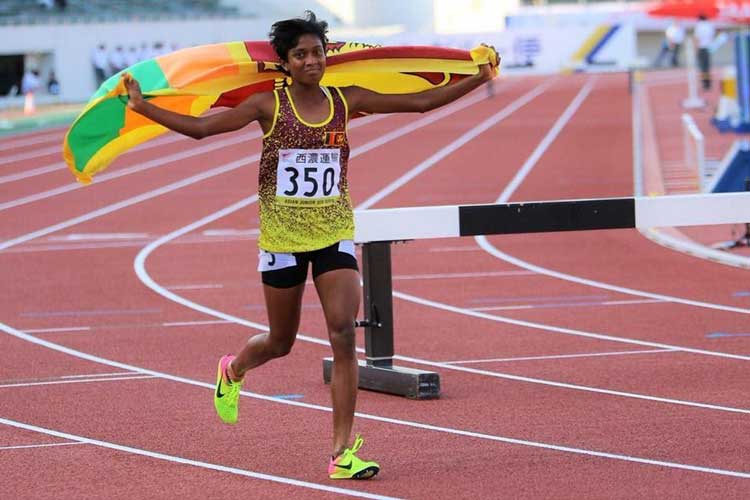 The young steeple chaser first grabbed the attention of the Sri Lankan athletic fraternity competing at the Asian Junior Athletic Championship, which was held in Gifu, Japan in June this year. Parami managed to win the Women’s 3000m steeple chase despite running with competitors two years her senior, to become the Asian champion. Despite being 17 years of age, she outsmarted and outran the older and more experienced Wanhua Tian of China and Yuka Nosue of Japan, racing to a new Personal Best(PB) time of 10:21.54 min.  A time 15 seconds faster than her previous personal best in the event.

With her victory at the Asian Junior Championship, Parami secured qualification to compete in the IAAF World U20 Championship which was held in Tampere, Finland. Again, Parami had to contest with top U20 athletes from around the globe while still having two more years to compete in the same age group.   Despite not making the final as she was placed 5th in the heat with only the top three athletes making the final, the youngster bettered her PB, clocking 10:20.12 and delivered a new Junior National Record in the U20 Women’s 3000m Steeple Chase.

IAAF World U20 Championship which is being held in Tampere..

These performances from this promising youngster at very competitive international events, where she had to compete against athletes older than her, showcased the ability and the maturity she possesses. While Parami, her coach Janith Jayasinghe and the eager athletic enthusiasts started dreaming of a Youth Olympic medal, there was one more obstacle to be surpassed as she needed to earn qualification for the Games through the Asian qualifier which was held at Bangkok, Thailand in July. If anyone had even an iota of doubt about this magnificent talent, young Parami made a statement as she stormed to victory in the Women’s 2000m steeple chase where she cut 23secs from her then personal best of 6:59.63minto clock 6:35.20min. This was a dominant performance by her and at the time it was ranked the best time recorded in the Women’s U18 2000m steeple chase resulting in Parami becoming a hot medal prospect for Sri Lanka at YOG2018.

It was an ideal platform for the youngster in the run up to the Youth Olympics to have been able to compete in 4 international competitions in the South Asian Juniors, Asian Juniors, Asian Qualification for Youth Olympics and the U20 World Championships. This is an opportunity very rarely received by the athletes of the country and the young steeple chaser took the opportunity with both hands.

Parami’s success would not have been possible without her Coach Janitha Jayasinghe envisioning it for her. In her own words Parami said, “I am here because of Janith Sir, from the beginning he trained me with a plan, he figured that with only running in the beach we will not be able to achieve the goal of a Youth Olympic medal. We practiced at the Sugathadasa stadium twice a week, I trained twice a day, six days a week. There is a farm in Kowulwewa about 30km form Kuliyapitiya, where we built a cross country track as we knew a cross country race will be the second stage of the competition. Janith sir spent a lot of money for all these things apart from the grants I received from the well-wishers.”

“Parami Wasanthi is an athlete whose journey was very methodical and well-paced. From 2016 where she won the Silver at the Children of Asia Games to winning all the local competitions, I’ve had an elaborate plan for her. In 2017 Parami suffered from a Hemoglobin deficiency, prompting her to fall sick very regularly, so as a coach I had to decide, and I changed her events to the 100m hurdles and 400m hurdles events. This girl even won accolades in the All Island Games and National events competing in these events” Parami’s coach, Janitha Jayasinghe said. He went on to add that “in the later part of 2017 she got selected to play for the Sri Lanka Under 17 Girls’ rugby 7s team and toured Dubai, UAE for the Asian Under 17 Women’s rugby 7’s Championship. I did this to make sure that her self-confidence stayed up. It was only after her hemoglobin levels returned to normal that I sat her down to map out the plan for the Youth Olympic Games and how we would achieve that goal” 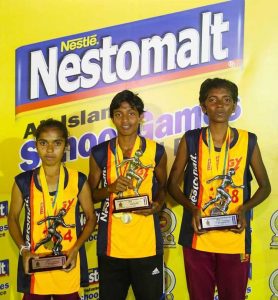 Since achieving qualification in July, Parami took part in the All Island School Games 15km road race and won it convincingly. In September, Parami also participated in the Sir John Tarbet (Senior) Athletic Championship where she won the Under 18 2000m steeple chase event with a new meet record and also dazzled in the U18 3000m where she delivered a new meet record time; the overall fifth best time recorded in the 3000m in the country. This however attracted critics who believed that the 17-year-old girl was being overworked and criticized her coach for over working her.

“If someone says that Parami is being over trained, over worked and that she does not have a future, they are baseless accusations by people who know nothing about coaching. I would like to tell them to research and find out how Ethiopia, Kenya, Germany and France train girls of this age group for this event. If they do that they will tell me – Janith train Parami even more” the coach of Sri Lanka’s first youth Olympic medal winner said, responding to the criticism.

He also went onto explain the vision he had to bring this glory to the motherland, “With Parami I did something novel in the Sri Lankan field of athletics. Steeplechase is a new event for Sri Lankans. This event is only conducted in two or three events in the country, it is not even an event in the All Island School Games. In such circumstances, Parami now has a Youth Olympic medal in 2000m steeplechase. So, if we did not have a plan and a methodical approach this victory would not have been possible.”

The committed coach, who has dedicated not only his time but has become a debtor not hesitating to spend on the wellbeing of this young athlete, spoke on his plans for the athlete, “I have a very methodical plan with my athletes, I have made a long-term plan for Parami till 2024. The same way we planned out the four-international tournaments this year and managed to achieve brilliant results in them, our next target is going to be the Junior Asian Athletic Championship 2020, we can go for a Gold medal with a new meet record in the event. The World Youth Athletic Championship 2020 will be held in Kenya, through that we need to try and earn qualification for the 2020 Summer Olympics which will be held in Japan. I am only expecting an Olympic medal from Parami for Sri Lanka in another six years, that is at the 2024 Olympics.”

Winning Sri Lanka’s first Youth Olympic medal, Sri Lanka’s first global athletic medal since year 2007, there is no doubt that this courageous young girl and her determined coach have done the country proud with their relentless dedication to achieving greatness. But as it is the case in most occasions with dedicated track and field athletes, the responsible authorities and the country has let them down, Parami Wasanthi Maristela is no exception. After her Gold medal victory at the Asian Junior Athletic Championship, Parami Wasanthi and Aruna Darshana were promised a house in Colombo so they may be able to attend training in Colombo conveniently, the entire squad was also promised a sum of Rupees 75,000.00 per month in order to meet their sporting expenses till 2022. But in a shocking revelation, this is what Parami had to say on her arrival, “My house is in a dire stage currently, it gets flooded even for the slightest rain. The Education ministry gave me a sum of Rs. 100,000, The sports Ministry promised that they will be giving us an allowance of Rs. 75,000 every month, but we only received it for one month, this put us in a very difficult situation. My coach spent a lot of money, expecting that amount back and we have now become indebted. My parents have mortgaged our land, I did not even know that”

A dedicated young athlete willing to push the boundaries and a coach who has dedicated his life to bring glory to Sri Lanka has delivered the country their first Youth Olympic medal. It is now up to us, the proud Lankans who were quick to boast about Parami’s medal, who flooded social media with ‘Proud to be Sri Lankan’ posts and the massive corporates who were quick to use Parami’s photograph to gain some mileage, to fulfill our responsibility towards this young gem.