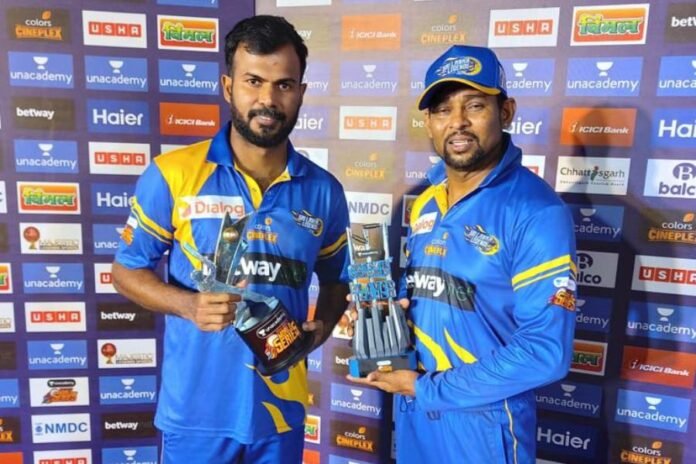 Sri Lanka Legends’ skipper Tillakaratne Dilshan won the toss for the third consecutive time in the tournament and elected to bat first this time around after chasing down targets in the last two games against West Indies Legends and South Africa Legends.

As usual, Dilshan and Sanath Jayasuriya opened the innings for Sri Lanka Legends and they got off to a decent enough start putting on 37 runs in 5.2 overs before Dilshan being trapped in front for 33 runs off 23 balls with 6 fours.

In the sixth over of the innings, Jayasuriya got a hamstring injury to his right leg thus went off the field. Then Chamara Silva joined Upul Tharanga at the middle and they put on a 53-run partnership in 6.3 overs setting the platform for a big score on the board.

Though Sri Lanka kept losing wickets at regular intervals, Tharanga played a blinder of innings guiding them to 180 runs in the allotted 20 overs. Tharanga made an unbeaten 99 runs off 47 balls with 11 fours and 5 sixes.

Chasing 181 runs to win, Bangladesh Legends got off to a superb start as their openers Mohammed Nazimuddin and Mehrab Hossain put on 57 runs in 7.2 overs. However, the skipper Dilshan brought Sri Lanka back into the game dismissing the top three batsmen with his useful off-spin.

Bangladesh Legends ended up getting only 138 runs for 6 wickets in the allotted 20 overs handing a 42-run win for Sri Lankans. Nazimuddin top scored with 54 runs off 41 balls with 5 fours and 2 sixes.

Dilshan was the pick of the bowlers as he grabbed 3 scalps for 21 runs while the speedster Dhammika Prasad shone with the ball taking 2 wickets for 22 runs.

With this win, Sri Lanka Legends top the points table with 16 points and will play their final group game against England Legends on 14th March at the same venue.