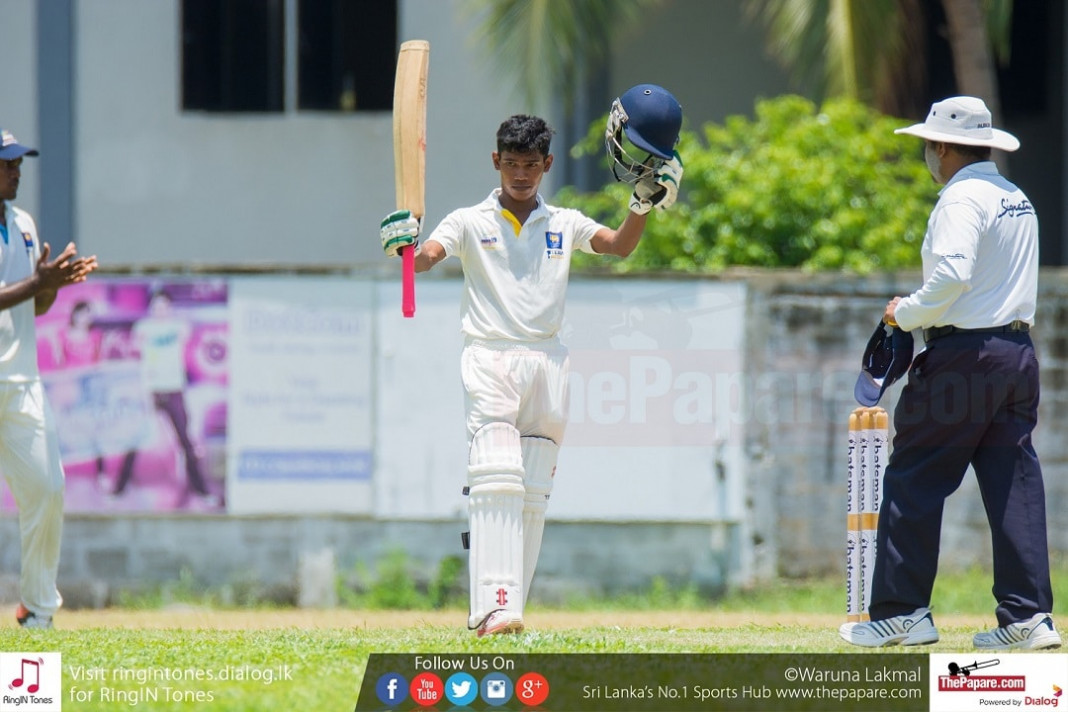 Pathum Nissanka of Isipathana College and Mishen Silva of St. Sebastian’s College struck brilliant centuries for their respective provincial teams but rain interrupted all four matches of the SLC Super 19 Provincial Tournament 2016 which were played on Wednesday.

The 17-year old right-handed batsman Pathum Nissanka completed his century for Western Province Central against Western Province North on day two but the game ended in a drawat the Wesley College grounds.

Due to wet outfield, the game started at 12.15pm with Western Province Central resuming on the overnight score of 229 for 4. Josephian seamer Jehan Daniel struck early when he removed Vishad Randika for 5. None of the following batsmen including Manelkar De Silva and Charana Nanayakkara made noteworthy contributions as Daniel and his skipper Sammu Ashan ripped apart the Western Province Central middle order cheaply.

Nissanka after being 97 not out reached the milestone inside the first 10 minutes and went onto score 128 off 139 balls with 21 fours to his name before he fell to Daniel who ended with impressive figures of 4 for 84 as Western Province Central managed to post only 291 for 9 from their allotted 65 overs.

In reply, Western Province North lost Thilina Vimukthi and Krishan Sanjula for just 10 runs to the bowling of Isipathana College seamer Neranjan Wanniarachchi. The left-handed Josephian opener Nipun Sumanasinghe and Anandian Sammu Ashan added 77 for the 3rd wicket before heavy rain brought a pre-mature end to the game. Ashan was unbeaten on 55 off 62 deliveries with 8 fours and a six.

The North Central innings commenced on day two from their overnight score of 174/6 but they lost their remaining four wickets cheaply to end the innings on 181. The Cambrian left-arm spinner Thilan Nimesh was the chief destroyer picking up four wickets for 56 runs while fast-bowler Inosha Geshan picked up 2 wickets.

In reply, Western Province South lost wickets at regular intervals and were struggling at 56 for 4 when the St. Sebastian’s duo, Nuwanidu Fernando and Mishen Silva constructed a match-winning 109-run stand for the 5th wicket. Fernando stroked 10 fours during his elegant 82-ball 58 but Silva was the real aggressor scoring 103 off 129 balls with 12 fours and 2 sixes to guide Western Province South to 271 for 7 when rain interrupted play in the second session on day two. Fast-bowler Sachin Dissanayake was the pick of the bowlers taking 3 wickets for 38 runs.

Northern Province missed out on a well-deserved first-innings win over Uva Province due to rain as the game ended without a result at Army grounds in Mattegoda.

The Northerners resumed from 115 for 5 and went on to post 176 runs on the board. V Jathushan made a useful 60-ball 38 while tailender K Kapilraj blasted a 19-ball 23. Left-arm spinner, Avindu Theekshana ended with excellent figures of 7 for 51.

The boys from Central started day two from their overnight score of 136 for 4 but Gunawardene destroyed the late middle order to pick up 6 for 35 and restrict Central Province for just 162 runs.

In reply, the Eastern Province chase was inspired by two-down batsman Crosspulle who remained unbeaten on 67 off 84 runs with 9 fours and 2 sixes during his 145-minute knock before rain arrived to spoil the first-innings points for the Easterners as they were 125 for 4.