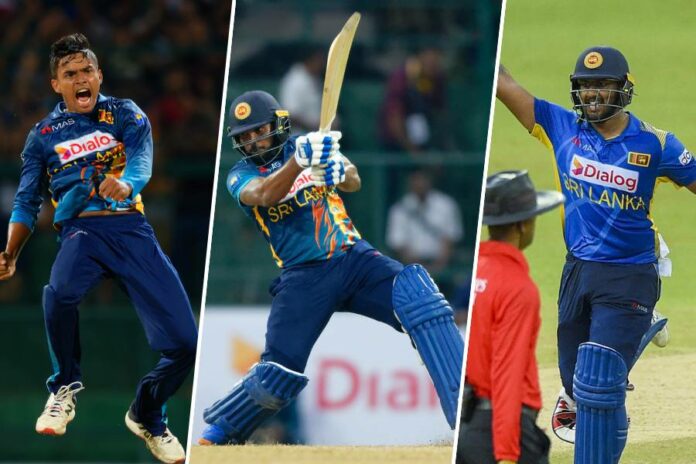 Playing international cricket for one of the leading cricketing nations in the world is not an easy task and crossing that hurdle as a teenager is even harder.

But there have been some notable names in Sri Lanka Cricket that impressed the selectors so much that they wore the national jersey before they hit their 20s. A teenager playing international cricket during the 80s & 90s was quite common, even during the early 2000s we saw teenagers making international debuts.

Over the years we have seen cricketers who were trusted as teenagers becoming big names in Sri Lanka’s cricket history. We saw ‘Captain Cool’ Arjuna Ranatunga making his debut as a teenager during the inaugural Test match of Sri Lanka. We all know what followed as he became one of the most elite players in Sri Lankan history. His long time teammate Aravinda de Silva also arrived at the international scene as a teenager and later in his career ‘Mad Max’ played the most valuable knock in Sri Lankan Cricket history when he scored that World Cup final winning hundred against Australia. Marvan Atapattu is another name that burst into the international scene as a teenager. Yes he had the worst start possible to a career when he scored 5 ducks in his first 6 Test knocks but he ended his career with 6 double centuries in Test cricket.

One of the most sought-after players in the World at the moment, Wanindu Hasaranga who hails from Richmond College Galle broke out to the international scene as a 19-year-old back in 2017 against Zimbabwe. He set the stage on fire immediately, with a hat trick that destroyed the Zimbabwean batting line-up. With this feat he also became just the 3rd bowler in ODI history to take a hat trick on debut.

Fast forward 5 years to the present day, he has achieved numerous milestones like being on of the most expensive overseas picks in the IPL, becoming the number 1 T20 bowler in the World, taking most wickets in a T20 World Cup and being named in the ICC T20I and ODI teams of the year etc.

Wanindu did have a bad phase during his 1st year of International Cricket and got discarded. But he made one of the most amazing comebacks ever by a cricketer in 2019 and has become a core player in white ball cricket for Sri Lanka. A true fighter in every sense of the word, his sheer ability to completely change the whole complexion of a match singlehandedly has been truly remarkable.

With his amazing all-round capabilities, the sky is the limit for the Sri Lankan superstar and he will most definitely play a huge part in Sri Lanka’s success going forward.

Just imagine being an 18-year-old and getting the chance to fill the void left by the legendary Sri Lankan opener TM Dilshan. For all of us it was just a day-dream but for Avishka Fernando it became a reality.

Just a few months after playing the Under 19 World Cup for Sri Lanka in 2016, this kid from St. Sebastian’s College received a national call-up. And he also got the opportunity to play against a strong Australian side.

Yes, his debut may not have been the most memorable one as he was dismissed for a second ball duck by the ace limited overs bowler from Australia, Mitchell Starc, but 3 years later he came back as a new and improved version of himself and starred in a World Cup for Sri Lanka. I mean, who can forget those 2 sixes he scored against Jofra Archer at Leeds?

He also became the youngest Sri Lankan player to score a World Cup century with his fine knock against West Indies in the same edition. He hasn’t looked back since returning in 2019 and is one of the vital cogs of the Sri Lankan white ball cricket plans, going forward.

An absolute gem, those are the 3 words Sri Lankan Cricket fans and pundits say about Dunith Wellalge after 2 international matches. That’s right just 2 matches, he earned the trust of the captain, fellow players and the fans with 2 very impressive performances.  The specialty of Wellalage was that he didn’t show an ounce of pressure on his debut. He looked like a player with decades of experience when in reality he was just making his debut.

How he bowled against one of the ‘Fab 4’ Steven Smith, how he took that high pressure catch of Pat Cummins and how he handled the pressure bowling death overs against the explosive Glenn Maxwell showed to the whole world that he may be a 19-year-old but he’s here to stay for the long haul.

The potential this kid has and the talent he possesses is truly phenomenal for a country that’s searching for players of that quality. He made his Under 19 Sri Lanka debut as a 15 year old and a few years later he went on to captain Sri Lanka in the Under 19 World Cup. His leadership skills were also highlighted during the tournament but what really stood out was his ability to contribute equally in all 3 disciplines.

After 6 matches at the World Cup, Wellalage scored 264 runs and took a massive haul of 17 wickets to become the highest wicket taker of the tournament. He was one of the top contenders to win the Player of the Tournament award as well. His gutsy half century in the national super league final post world cup and impressive outings for Sri Lanka Emerging and Sri Lanka A have showed his resilience and pure class.

A world class all-rounder is something that Sri Lanka have been searching for a long period of time, with Wellalage’s arrival there’s a glimmer of hope for Sri Lanka and hopefully this young lad from St.Joseph’s can fulfill the potential and rewrite the record books with his name.