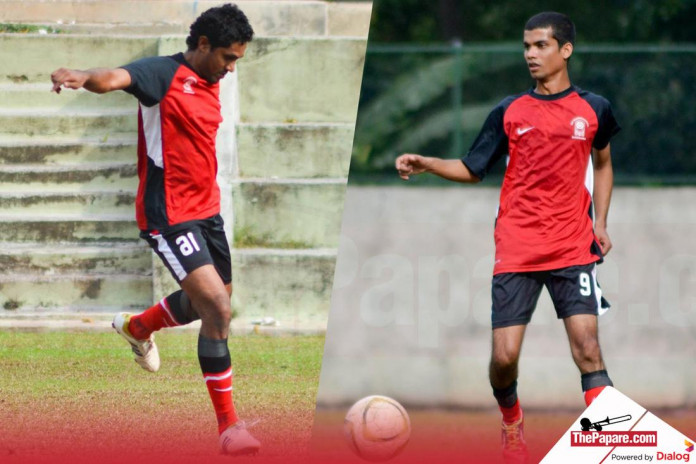 A Goal apiece in each half from Supun Kumara helped Old Mazenodians towards a famous win over Pelicans SC at De Mazenod College grounds Kandana.

The home team kicked the game off on a bright and sunny afternoon in Kandana.

Old Mazenodians fielded an attacking team which lined up 4-3-3 even though they were minus suspended Centre Forward Tharanga Bandara. Pelicans, playing away from home lined up 4-2-3-1 with the intention of using the width of the field in their favor.

Playing away from home did not curtail the Pelican attack as they made the Mazenodians work in the first few exchanges of the game. After the early nerves eased out the Mazenodians discovered their feet to get back into the game.

With the half drawing to a tame end the Old Mazenodians sparked an attack and subsequently Supun Kumara finished from an acute angle to bring the first half to an end and head into the shed with the upper hand over the Pelicans.

Pelicans SC came out all guns blazing following a hash half time talk from Manager H.Y Upali. The Half time talk had an effect on the Pelicans as they worked the Mazenodian goal keeper and also hit the cross bar on a couple of occasions.

With time running out on the Pelicans SC they pushed bodies forward and as a result was short of numbers at the back. Pelicans SC were penalized for fouling an Old Mazenodian and the resulting free kick was awfully spilled by a tired looking Pelicans Goal keeper. Supun Kumara of Old Mazenodians was the first to react as he pounced on the loose ball and had the easiest of tap-ins to double his and the team score. (Old Mazenodians 2-0 Pelicans)

With the game put to bed the Old Mazenodians rested on their laurels and a horrible mix up between Keeper and Center defender saw Dammika Nandasiri score the easiest goal of his career in added time to cut the deficit in half for the Pelicans. (Old Mazenodians 2-1 Pelicans)

The goal from Pelicans was the final piece of drama in the game as the referee blew to put an end to the game and hand the Old Mazenodians a famous win at home.