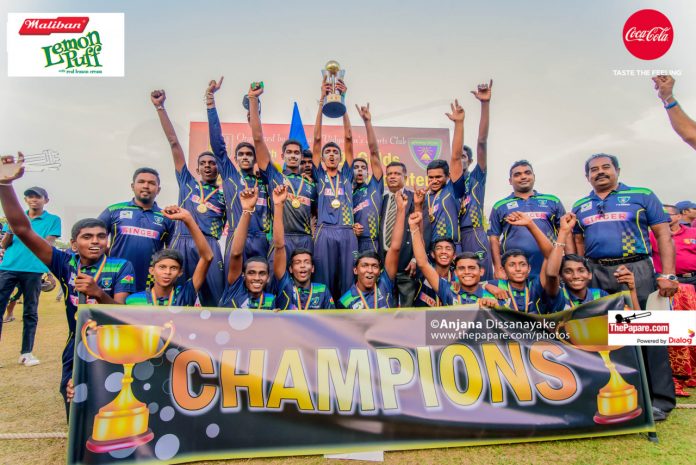 The 28th edition of the limited-overs encounter between Moratu Maha Vidyalaya and Sri Sumangala College Panadura ended in favour of the latter today (08th March) at the De Zoysa Stadium in Moratuwa. The Sumangalians comfortably defended the target of 221 runs thus won the match by 72 runs.

Read More : 68th Battle of the Golds ends in a nail-biting finish

After winning the toss, the Sri Sumangala College Skipper Anuka Jayasinghe opted to bat first without any hesitation on a dry surface expecting to get assistance for their spinners later in the day. Sathira Fernando and Mihiranga Fernando opened the batting for Sri Sumangala College but their partnership did not last long as the former was bowled by Niraj Kavishka’s in-swinging delivery for just 2 runs.

Charuka Peiris made 34 runs off 75 balls while Tharana De Silva top-scored with a knock of 63 runs off 60 balls including 6 fours and 2 sixes at a strike rate of 105. Prabash Jayasekara coming to bat at number 5, also contributed with 37 runs off 39 balls with 3 fours.

At one stage, the Sumangalians were 192 for 5 with 9 overs remaining in the innings but a batting collapse saw them being bowled out for 220 runs in 48.5 overs. The leg spinner Chamalka Fernando who came to bowl at the later stage of the innings picked up 3 quick wickets for 10 runs for Moratu Maha Vidyalaya.

In addition to that, the off-spinner Vishwa Fernando shone with the ball taking 2 scalps for 30 runs. Chasing 221 runs to win, the Moralians got off to a shaky start losing the opening batsman Dilshan Peiris for no run in the very second over of the innings.

Then the number three batsman Chamalka Fernando tried to rescue the innings building a 37-run partnership with the opening batsman Vishwa Fernando (16) for the second wicket and 38-run partnership for the third wicket with the skipper Madushan Dilakshana (13).

However, the partnerships insufficient as they kept losing wickets at regular intervals and eventually bowled out for 148 runs in 46.4 overs. The right-handed batsman Chamalka Fernando top scored with 38 runs off 56 balls including 3 fours while Sukitha Dewthilina contributed with 25 runs off 50 balls with 2 fours.

The left-arm spinner Vidusha Peiris was the pick of the bowlers for the lads from Panadura as he grabbed 4 wickets for 26 runs. The other two left-arm spinners in the team Vishwa Lahiru and the skipper Anuka Jayasinghe picked up 2 wickets each for the Sumangalians.