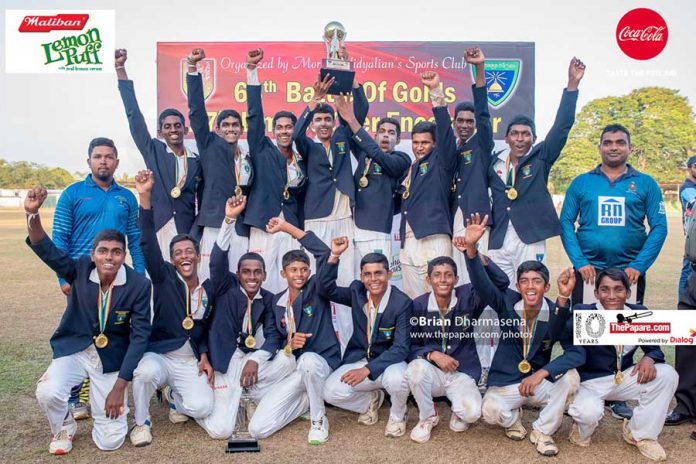 The Battle of the Golds between Sri Sumangala College, Panadura and Moratu Maha Vidyalaya, Moratuwa ended in a draw today (7th March) at the De Soysa International Cricket Stadium, Moratuwa. Both teams took turns to control the game but it ended in a thrilling finish without a clear winner.

Moratu Maha Vidyalaya resumed day two on 114 runs for 4 wickets, trailing by 107 runs with 6 wickets in hand. The Moralians expected to bat better and get a significant lead in the first innings but things did not go as planned as they were bowled out for just 150 runs in 47 overs.

The skipper Madushan Dilakshana top-scored with a knock of 46 runs, while Chamindu Ravishan and Vishwa Fernando chipped in with 23 runs each. Vishwa Kumara and Anuka Jayasinghe of Sri Sumangala College bowled extremely well as they ran through the batting lineup of Moratu Maha Vidyalaya taking 4 scalps each.

Sri Sumangala College began their second innings 71 runs ahead but the whole batting unit unexpectedly collapsed as they were bowled out for just 87 runs in 31.5 overs, setting a target of 159 runs to win for the Moralians.

Chasing 159 runs to win, Moratu Maha Vidyalaya batsmen were well in it but missed the target by just 9 runs as the umpires called stumps when the score was on 150 runs for 8 wickets in 48 overs. The skipper Madushan Dilakshana starred again with the bat, scoring 44 runs while Rashan Kavishka contributed with 30 runs.