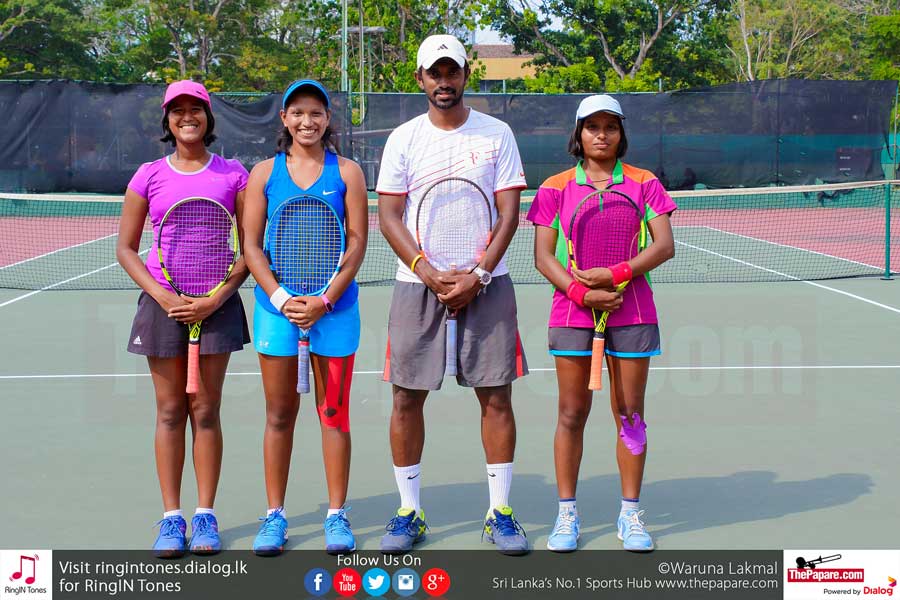 After a grueling week of world class tennis, the 2018 National Fed Cup team will return to Sri Lanka after emerging 9th in a 12-nation battle in the Asia/Oceania Group II Fed Cup tie, recently concluded in Isa Town, Bahrain.

The Sri Lankan entourage was captained and coached by Dineshkanthan Thangarajah and was accompanied by senior player Nethmi Waduge as the top gun for the tour. Filling the remaining three spots were debutants to the Senior Fed Cup team Anika Seneviratne, Savini Jayasuriya and Janali Manamperi. The team pulled through to the 9th position in a collective effort.

Sri Lanka, drawn to Pool D along with Pakistan, Bahrain and Indonesia ended the week with a win /loss ratio of 4-5. First in the way was mighty Pakistan – a team that is highly ranked in the international circuit. Anika Seneviratne pulled a win in the second rubber only to partner up later in the day with Nethmi Waduge in the doubles and as the pair failed to record their first win. Coming off a long rest of 8 months due to her advanced level examinations, senior player Nethmi Waduge went down to Mahin Qureshi with a decent score and the doubles ended 6/1,6/4 in favor of Pakistan.

The World Cup of Women’s Tennis, the Fed Cup by BNP Paribas is..

The Lankans pulled up their socks on the second day out to claim their first win for the year as they faced the hosts Bahrain. Not only did the girls get their win, they completely whitewashed the Bahraini women on home soil winning the tie 3-0. The stellar performance was topped with perfect scores in all three rubbers; not giving away a single game.

The last rubber in group D was against Indonesia, who have a world ranking of 34. Indonesia had not lost a single rubber in the series and were by far the most dominant team in the mixture. As experience would prove it, Indonesia went on to win all three rubbers against Sri Lanka with ease to advance to the promotional tie against Uzbekistan. With Sri Lanka’s win/loss ratio being so, the Lions time in the tournament was drawing to a close as they went on to play Lebanon in a battle for the 9th position out of the 12 nations in group II.

Nethmi Waduge took the first singles against Yara Fayssal and performed admirably to light up the way for the team to grab the 9th spot. Waduge with all her years in the Senior Fed Cup Team as well as other major National leagues, used experience as key and demolished Fayssal 6/3,6/2 to take home the game. Anika Seneviratne took on the second singles Honda Habib, a first year Fed Cup player. Habib stood no chance against Seneviratne as the Lankan finished off an easy game of tennis 6/0,6/2. Seneviratne then partnered up with Janali Manamperi to drive the Lankans home with a win in the doubles to finish strong.

By the end of the final day of play, Sri Lanka secured their 9th place along with the doubles win (6/2,6/4) and ended the Bahrain tour on high note. This victory sealed Sri Lanka’s fate for Group II for 2019.