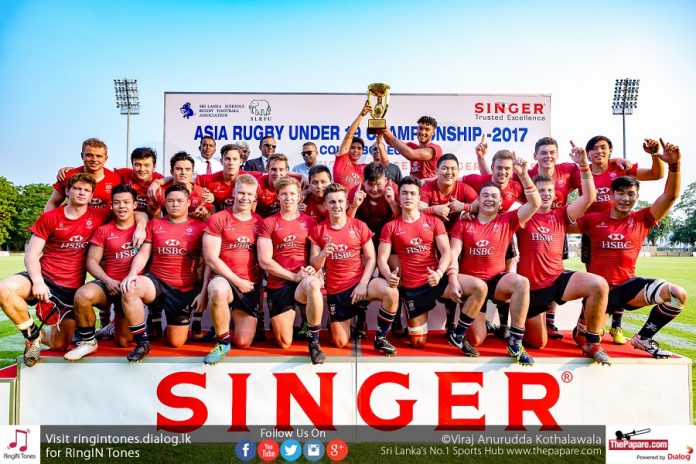 Visitors Hong Kong comfortably dispatched hosts Sri Lanka to record a 37-8 win in the first leg of the Asia Under 19 Rugby Championship game played at Racecourse International Stadium this evening.

The visitors got out of the blocks quickest as they tormented the home team from the word ‘go’.

Marcus Ramage was the first to get on the score sheet as he dotted down from a Sri Lankan error in the line out minutes after they were denied an early try in  unfortunate fashion for obstruction.

Five-eighth Paul Altier added the extras even though he wouldn’t have had any idea what this afternoon had in store for him. (SL 00-07 HKG)

Both teams were feeling their way into the game after a scrappy first few exchanges which saw both teams making many errors.

It took the home side 15 minutes to get points in their own backyard. Chathura Seneviratne was on target with his first shot at goal after Hong Kong were penalized at the scrum. (SL 03-07 HKG)

The home side looked like they found their footing as twin Gregor Ramage saw yellow for a late charge on Seneviratne and Sri Lanka sniffed blood. However, once the kick at goal was missed by the Sri Lankan five-eighth, Hong Kong capitalized, despite being a man down.

Sri Lanka was undone by their own mistakes as the second try for the visitors came off a dropped ball. A dazzling move from the resulting scrum saw Alex Nisbet crashing over the white wash.

Altier failed with the conversion, taking his kicking percentage to 50. (SL 03-12 HKG)

The junior Tuskers afternoon was heading in the wrong direction as the visitors seemed to be running away with the game in the first half.

The visiting wingers were having a ‘ball’ as both lads touched down before the end of the first half.

Ramage made it two for himself as the inform no.14 was unstoppable with ball in hand. Meanwhile Shun Hong Chong matched his team mate with a try of his own.

Altire failed with both attempts at goal as the first half drew to a close with the visitors in firm control of the game.

A mistake ridden home side finally scored at the start of the second stanza through a try from Theekshana Dassanayake. However, they knew they had a mountain to climb. Seneviratnefailed with the extras and the mountain top was not in site.

Flanker and twin Gregor Ramage was on hand to dot down from the resulting restart as Sri Lanka paid the prize for not having a clear exit strategy from their own 22.

Marcus Ramage completed his hat-trick following a great run from big number 8 Max Denmark. The winger was on hand to get his third as Hong Kong were toying with Sri Lanka at the partisan packed stadium.

Loose head Jay Cooke added the gloss on a perfect outing for the visitors as the big prop broke through to score to his own delight.

Altire missed all but one of his kicks even though his running game proved vital in the encounter.

The home team had one last hurrah to towards the try line, but Seneviratne decided to show and go and dropped the ball, summing up Sri Lanka’s performance this outing.

Sri Lanka have left themselves with a lot to do in the corresponding fixture set to take place on the 16th in Hong Kong.