A bowling performance by Sri Lanka that left much to be..

Dhananjaya De Silva and Kusal Mendis rescued Sri Lanka after the visitors got off to the worst possible start having conceding 513 in Bangladesh’s first innings.

The two went on to put on 187 runs partnership,taking Sri Lanka to stumps on day 2 on a score of 187 for 1. Dimuth Karunarathne continued his bad first innings run as the left hander was caught at slip in the third over, off the bowling of Mehidy Hasan.

Early in the first session, centurion Mominul Haque was the first to be dismissed as he was caught by Kusal Mendis at short leg off the bowling of veteran spinner Rangana Herath. Haque was dismissed for a sensational 176 off 214 balls as Sri Lanka put a tough first day behind them.

Mosaddek Hossain (8 off 15) was dismissed cheaply as Mehidy Hasan took the hosts past the 400-run mark. He was a victim of a suicidal run out as Sri Lanka seemed to creep into the Bangladesh tail.

Captain Mahmudullah showed a steady head and together with debutant Sunzamul Islam put on an unbeaten 50-run stand taking the home team into lunch on a commanding position.

Lakshan Sandakan struck three balls after lunch, dismissing debutant Sunzamul Islam for 24 off 56 balls. The left hander was stumped down the leg side as the home team’s tail got exposed.

Rangana Herath made use of the situation and clean bowled Taijul Islam through the gate as Bangladesh were approaching the 500 run mark.

Mustafizur Rahman joined together with captain Mahmudullah as the two put on 35 valuable runs for the final wicket, taking Bangladesh past the 500 run mark.

Mahmudullah remained unbeaten on 83 as Rahman was dismissed by Suranga Lakmal with a short delivery as the hosts innings was brought to an end at 513.

The final session belonged to the visitors as Dhananjaya De Silva and Kusal Mendis took the attack to the Bangladesh bowlers, not letting them settle down.

Sri Lanka scored a total of 137 runs, not giving away a single wicket, however, continued to trail Bangladesh by 326 runs as three days remain in the test match. Play is set to resume for day 3 tomorrow at 9am Sri Lanka time. 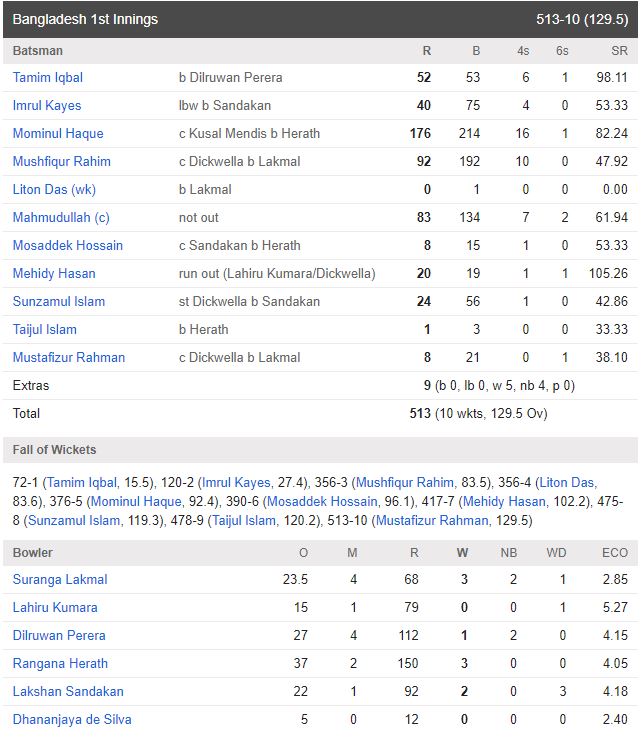 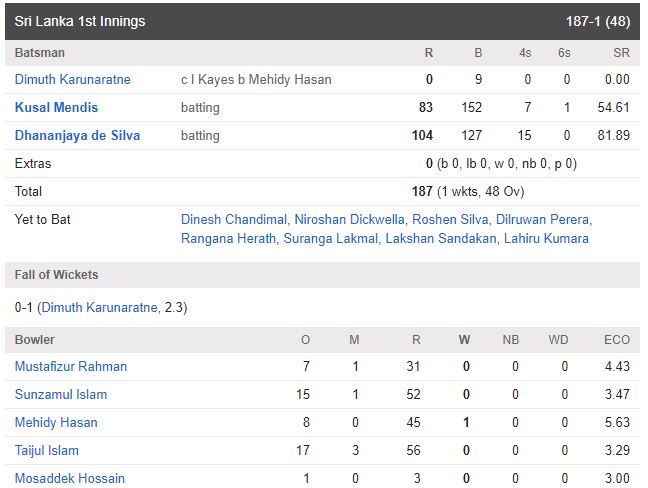