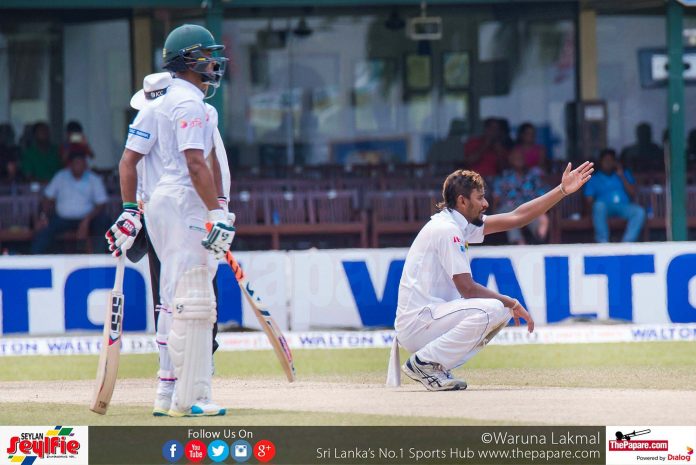 A bowling performance by Sri Lanka that left much to be desired enabled the hosts Bangladesh to rack up 374/4 at stumps on day 1 of the 1st Test between the two teams in Chittagong. 2 late wickets pegged things back but Mominul Haque remained unbeaten on 175.

Bangladesh’s 10th Test skipper Mahmudullah Riyad won the all-important toss and elected to bat first on a dry pitch that looked like it would deteriorate during the course of the Test. With the conditions looking to suit the spinners later on, the hosts came in with just the one seaming option, in Mustafizur Rahman, and three frontline spinners, including debutant Sunzamul Islam. Sri Lanka too opted for the three spinners, but Dilruwan Perera’s recent form with the bat enabled them to play both fast bowlers Suranga Lakmal and Lahiru Kumara.

It was the 2nd over of the day, Kumara’s 1st, that showed what was to come during the rest of the day as the young man went for 15, straying on both the off and the leg stump to Tamim Iqbal. It was just the spark Tamim needed as he went on to post his 25 Test half century in just 46 deliveries.

Kumara was taken off after just 3 overs and replaced by Dilruwan Perera who struck straight after Tamim got to his 50, getting one to go on with the arm and through the batsman’s defenses at which time Bangladesh had raced to 72 in 16 overs.

Mominul Haque had a few nervous moments in the middle at the beginning of his innings, looking to come down the track to the spinners. The plan against Rangana Herath in particular seemed to be to try and disrupt his line and length and with both Imrul Kayes and Mominul settling in, the veteran too seemed unable to hit his mark, going for 5+ runs an over during the day.

Bangladesh were cruising into lunch with just the one wicket down when Imrul Kayes was given out LBW to the bowling of Lakshan Sandakan but replays showed the ball going over the stumps. Unfortunately for the Tigers, Kayes decided not to review the decision and they went into lunch on 120/2.

The next two sessions were all Bangladesh as both Mominul Haque and Mushfiqur Rahim made runs at will on a pitch that had little to nothing on offer for the bowlers. Boundaries flowed off the bats of the Bangladeshis as the visitor’s bowlers offered them easy scoring opportunities.

Sandakan and Kumara in particular seemed to be unable to string together a decent passage of play, bowling short and wide to Mominul who looked in magnificent touch.

The stylish left hander brought up his 5th Test century in just 96 deliveries, the 2nd fastest for Bangladesh in Tests and finished unbeaten on 175.

Mushfiqur Rahim looked well set to get another Test century but fell in the 90s for the 3rd time in his career as he nicked behind off Suranga Lakmal to give Sri Lanka the opening they needed. Liton Das shouldered arms to the next delivery from Lakmal and had his off stump pegged back with 5 overs to go in the day’s play.

Sri Lanka were consistently going at over 4 runs and over during the day but managed to pull things back marginally in the 3rd session. Lakmal was by far the best bowler for the visitors, finishing with figures of 2/43 in 17 overs. 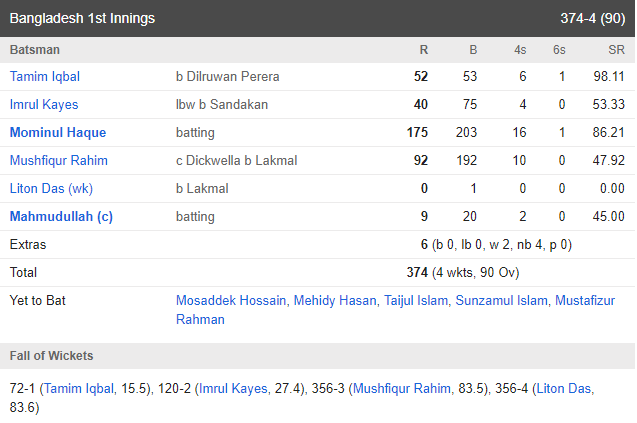