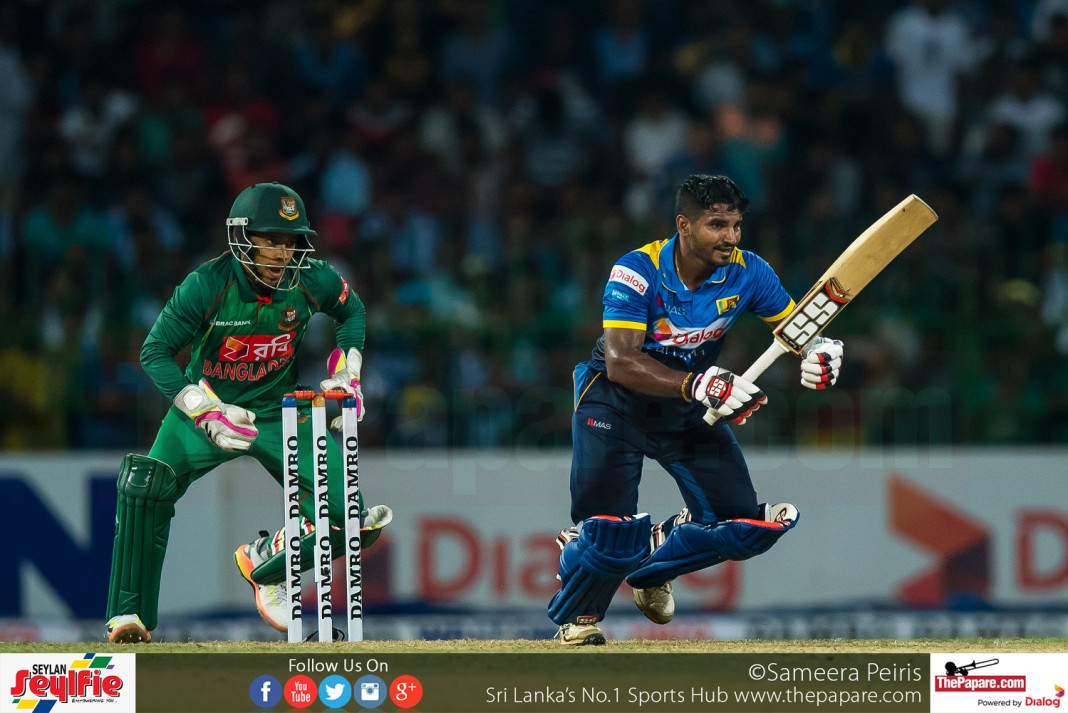 Kusal Perera returned to international cricket with a match-winning 77 as Sri Lanka comprehensively defeated Bangladesh by 6 wickets in the first T20 International worked out on Tuesday night at R. Premadasa International Stadium.

Perera timed the ball perfectly scoring 9 exquisite fours and one six during an innings filled with class as Sri Lanka chased down the target of 156 comfortably with 7 balls to spare after the bowlers restricted the visitors to only 155.

“I tried to finish the game. Had a couple of injuries, but recovered well. Every player has a couple of bad patches, have to get over it, do the hard work and get out of bad patches.“ Perera said after the match.

Earlier, the visitors opted to bat first but a sudden downpour delayed the start of play by 45 minutes, Lasith Malinga playing his first international match at home since November, 2015 bowled a magical inswinging snorter in the second ball of the match to castle Tamim Iqbal for a duck. In the same over, Malinga dropped a regulation when Sarkar was yet to get off mark.

Sarkar and Rehman pounced on some loose bowling by the Lankan seamers to accumulate 57 quick runs for the 2nd wicket but the latter did not run straight after pushing it to covers and Seekkuge Prasanna nailed it with a direct hit. A couple of balls later in the same over, Sarkar holed out to Thisara Perera at deep long-on off Vikum Sanjaya.

The Bangladeshis were restricted to 70 for 4 after being 57 for 1 when Mushfiqur Rahim was clean bowled by Asela Gunarathne while attempting the ramp shot. Seekkuge Prasanna brought out the ‘Dab’ celebration right after Shakib Al Hasan gave a simple catch to cover-point as the visitors lost half of their side for just 82 runs.

Mosaddek Hossain and Mahamadullah combined well together and ran smartly between the wickets to get Bangladesh back into the game adding 57 runs in 42 balls before Malinga did the trick again with a fiery yorker to remove the latter for 31. Hossain played a gem of an innings and remained unbeaten on 34 with 3 fours to his name to carry Bangladesh to a below-par yet a reasonable score.

In reply, Upul Tharanga and Kusal Perera opening the batting for the first time in T20I cricket had to deal with Mahamadullah’s off-spin in the first over which yielded only 2 runs. Taskin Ahmed was all over the park when Tharanga smashed three elegant fours in his wayward second over and Perera joined the party in the fifth over taking 16 off Shakib’s first over.

Mashrafe Mortaza who announced his retirement from T20I cricket after the current series took two important wickets in his penultimate bowling performance as an international T20 player. Tharanga guided straight to short third-man and one-drop batsman Dilshan Munaweera was caught and bowled by the skipper as Lankans were 79 for 2 at one albeit a cracking 65-run opening stand gave a blistering start.

Asela Gunarathne chipped in with 17 to add 41 runs for the 3rd wicket with Perera but Sabbir Rahman’s direct hit cut short the Soldier’s stay. Perera continued on his merry way as the hapless Bangladesh bowling attack was no match against a stunning onslaught of 77 runs in 53 balls.

Perera who notched up his 6th half-ton in T20I cricket perished to the bowling of Taskin Ahmed but by then the game was safely in Sri Lanka’s pockets. Seekkuge Prasanna coming to bat at number 6 finished off the game in style with a 12-ball cameo of 22 with two massive sixes and a four.

Incidentally, this is only Sri Lanka’s second win at Khettarama in 12 attempts. The 2nd and final T20I will be worked off on 6th April at the same venue. 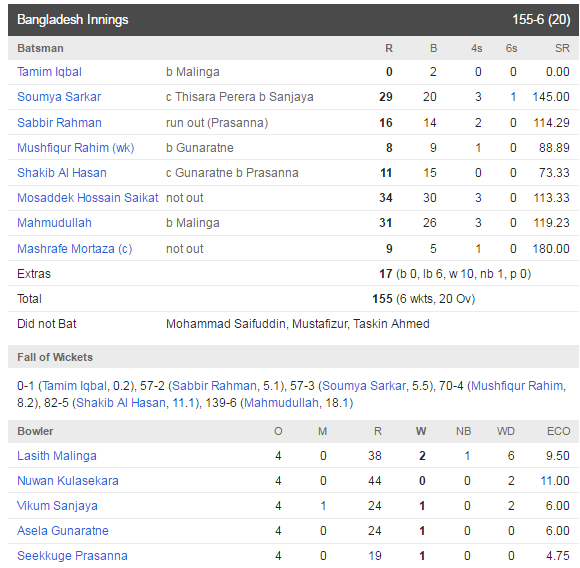 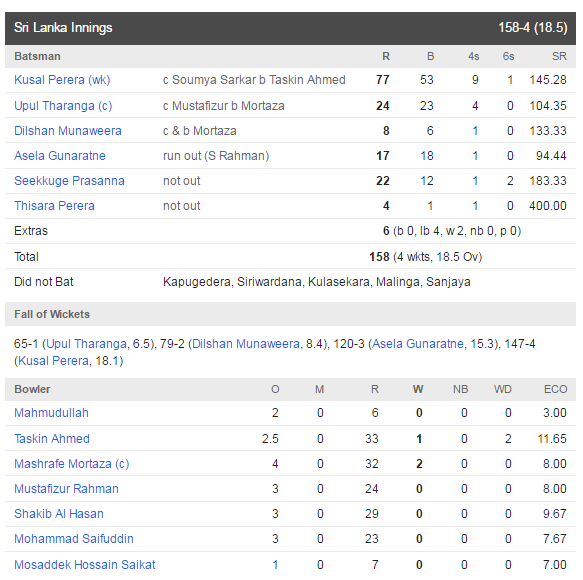