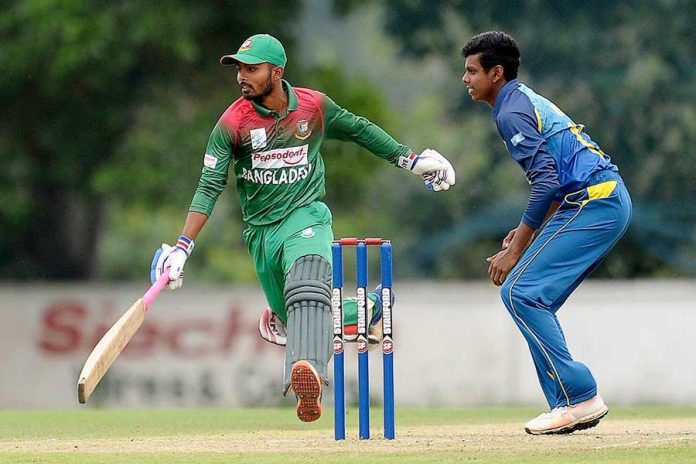 Sri Lanka U19s suffered a series defeat at the hands of Bangladesh U19s as they lost their third consecutive youth ODI match played today (17) at Khulna Cricket Stadium. After being 0-2 down in the 5-match ODI series, Sri Lanka U19s had to win this match in order to stay alive in the tournament but the hosts had other ideas as they comprehensively defeated the young lions, securing the series victory with one game in hand.

After winning the toss, the Sri Lankan skipper Nipun Dananjaya opted to bat first, making 3 changes to the lineup that played the last game at Chattogram. They were like for like replacements as Thaveesha Abhishek, Dilum Sudeera and Yasiru Rodrigo replaced Avishka Perera, Rohan Sanjaya and Dilshan Madushanka in the playing XI. The Sri Lankan opening pair, Navod Paranavithana and Mohammad Shamaz gave them a very good start, adding a 69-run partnership in 9.1 overs.

However, both the batsmen were dismissed within two deliveries, putting the visitors in trouble at 69 for 2. Paranavithana, who has been in tremendous form with the bat scoring two consecutive half tons (78, 50) in the concluded two games of the tournament, made 31 runs off 34 balls including 5 fours while Shamaz chipped in with 34 runs off 22 balls with 5 fours and a six. The number three batsman Thaveesha Abhishek built a solid 42-run partnership with Ravindu de Silva for the third wicket.

The skipper Nipun Dananjaya (27) joined Abhishek (37) at the crease and put on a 51-run stand for the fourth wicket but both were sent back to the dressing room within three deliveries when they were well set at the crease. After losing half of the side within 32 overs, the visitors needed someone to hang on in the middle to put a decent score on the board.

All-rounder Sonal Dinusha did exactly that, scoring an unbeaten knock of 43 runs off 52 balls with 2 fours while Chamindu Wijesinghe supported him at the other end, scoring a valuable 29 runs off 35 balls. With these decent contributions at the end of the innings, Sri Lanka U19s managed to post 260 runs for 7 wickets in the allotted 50 overs. Tanzim Hasan was the pick of the bowlers for the hosts with figures of 54 for 3.

Chasing 261 runs to win, Bangladesh U19s got off to a shaky start, losing 3 wickets for 69 runs in 12 overs. The right arm seamer Amshi de Silva impressed with the ball again, dismissing two of them. However, the middle order batsman Tawhid Hridoy rescued the innings, building a 62-run partnership with Shahadat Hossain and a match winning 110-run partnership with Akbari Ali.

Hridoy’s valiant century (115) with the bat was the standout performance of the match and helped him not only win the match for Bangladesh but also to win the Man of the Match award. His knock came at a very impressive strike rate of 95.83 with 9 fours and 3 sixes.

Akbar Ali’s effort with the bat was not second to him either as he slammed an unbeaten 66 runs off 60 balls including 4 fours and 2 sixes at a strike rate of 110. Amshi de Silva, the right arm seamer from the southern part of the island who had a decent outing so far in the tournament, continued to impress picking up 2 wickets for 55 runs in his 8-over spell.

Bangladesh U19 won by 5 wickets