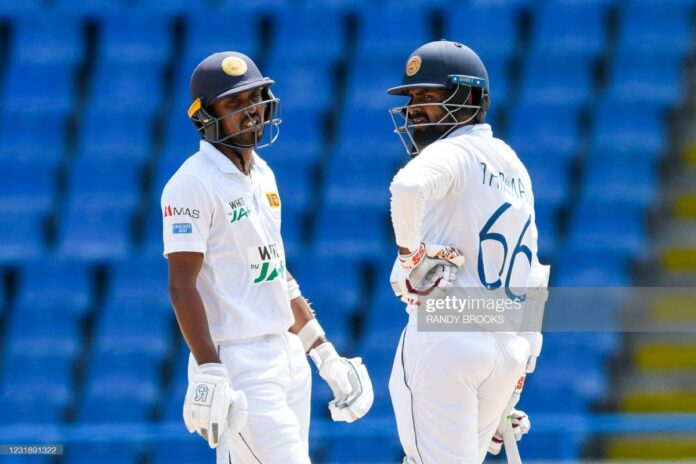 A record partnership of 162 runs for the 2nd wicket between Lahiru Thirimanne and Oshada Fernando scripted Sri Lanka’s fightback in the second innings on day three of the first Test match against West Indies at Sir Vivian Richards Stadium in Antigua as the visitors led by 153 runs at stumps.

The highest run scorer in the West Indies innings, overnight batsman Rahkeem Cornwall couldn’t stay at the crease much longer this morning as Vishwa Fernando managed to break through his defenses in the 2nd over of the day. The big Antiguan was undone by a delightful inswinger by Fernando, making the perfect start for the day for the visitors.

With the next man in, Shannon Gabriel, one of the most stereotypical number 11 batsmen of yesteryear, the end of the innings was just a formality. Fernando trapped him in front of the wicket within 3 deliveries in the same over to bundle out West Indies for 271 only adding 3 runs to their overnight score.

102 runs behind, Sri Lanka started their quest for a comeback in the second innings but their most prominent 2nd innings specialist, Dimuth Karunaratne, had to depart for just 3 runs leaving his team in trouble. The Sri Lanka skipper tried an uncharacteristic drive to a wide-ish delivery which ended up in the hands of John Campbell at third slip.

However, from then on Thirimanne and Fernando continued to dominate the West Indian bowling attack with ice and fire as Thirimanne blocked and Fernando attacked. Thirimanne was very aware of where his off stump is as he seemed to have perfected the art of leaving the ball.

Meanwhile Fernando played a contrasting innings to Thirimanne as he looked busy at the crease, constantly taking a step forward to negate the swing of the fast bowlers and the spin of Cornwall. Oshada was lucky to survive early in his innings as he edged one to leg slip off the bowling of Cornwall but Jason Holder was unable to hang on.

Those two nicely guided Sri Lanka past the 1st innings deficit of 102 runs and batted on and on. Come the back end of the afternoon session, the pitch looked eased out and the ball was barely swinging around compared to the morning session as the batsmen made sure to make the most of the situation.

Highest partnership for Sri Lanka in Caribbean for any wicket

Since his main men didn’t produced any goods, Kraigg Brathwaite introduced Kyle Mayers’ right arm medium pace into the attack and it paid off instantly as Fernando edged one to the keeper when he was on 91. Soon after, the number-4 batsman Dinesh Chandimal was dismissed without reaching double figures in the same fashion. ‘fullish length, pitches outside off stump, angling in, batsman pushes and edges, caught Da Silva, Bowled Mayers’

Meanwhile Thirimanne who looked solid as a rock throughout his innings without granting any chances, was dismissed by a ‘Kemar Roach special’ which found the timber through the gap between his bat and pad. This is the second time the Sri Lankan opener was sent back to the dressing room in his seventies in his match.

From then on, the Sri Lankan scorecard was safely looked after by the next men in- Dhananjaya de Silva and debutant Pathum Nissanka while adding a 66-run unbeaten partnership. Exotic De Silva kept the scoreboard ticking with his adventurous stroke play behind the wicket, toying with spinner Cornwall and the slip fielder and leg slip fielders as he notched up 46 of his own. Sri Lanka are currently 255 for 4 with a lead of 153 runs and the game is well-poised for an action-packed day 4.