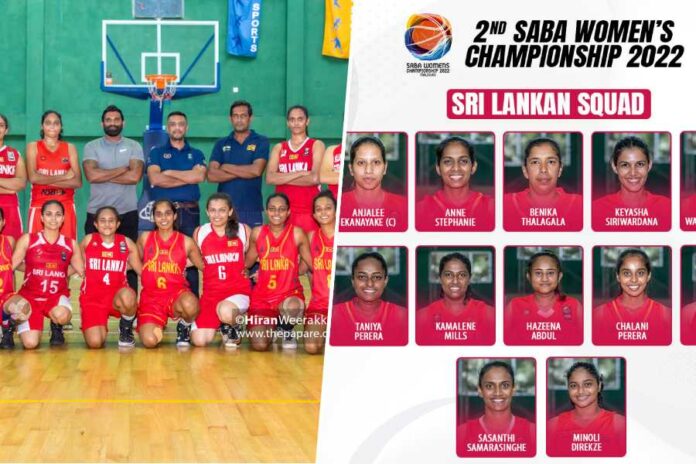 The 2nd SABA Women’s Championship will tip off in Maldives from 24th September to 30th September. Out of all the 6 South Asian countries featured in the last edition in 2016, only 4 countries will be participating this year, including defending champs, Sri Lanka.

Sri Lanka will be joined by Maldives, Bhutan and Nepal, who will battle for the title this year. The Islanders will start their journey on the 26th September playing against Bhutan while on 27th and 28th they will play against Nepal and Maldives respectively.

Anjalee Ekanayake will be leading the team while Benika Thalagala will bring in some much-needed experience. Sasanthi Samarasinghe, who is making her maiden appearance in the Sri Lanka women’s basketball team, will be in charge of rebounds and she is expected to do most of the scoring too.

The skipper will be supported by Anne Stephanie [newly appointed vice captain] who has also played a part in major tourneys on various occasions.

Joining the squad will be youngsters Lubna Morseth, Taniya Perera and Chalani Perera, the future stars of the side. These campaigners have gained exposure over the Commonwealth Games, Asia Cup and World Qualifiers.

Besides Samarasinghe, Kamalene Mills and Minoli Direkze will be the two center players in the squad. Minoli is the youngest amongst the 12 ladies representing Sri Lanka and she will have much to gain from the experience. Hazeena Abdul and Epciba Washington Clay will fill up the rest of the slots in the team card.

Prasanna Jayasinghe and Randima Sooriyarachchi have been given the task of guiding the players towards supremacy. With the time given, the two coaches have done their best in molding the players to best of their ability.

Clifford Surendran and Rodney Ockersz will assist the team as the Team Manager and Chef De Mission respectively.

Stay with Sri Lanka’s No. 1 Sports Hub ThePapare.com for all the details regarding the 2nd SABA Championship 2022.