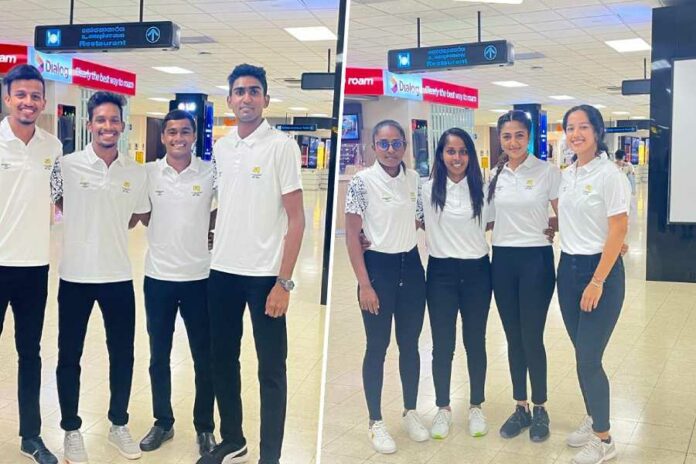 The Sri Lankan 3×3 Men’s and Women’s squads will take wing to Birmingham on the 25th of July 2022 and will commence their competition on the 29th of July 2022.

3X3 basketball is making its first appearance at the Commonwealth Games and will be played adhering to the FIBA Rules. Sri Lanka’s teams were fortunate enough to get their spot in the competition through their respective FIBA rankings.

Skipper Rukshan Athapaththu, an undergraduate at the University of Moratuwa is the key component of the team, with his exceptional skills in both defense and offense. Athapaththu is known as the package deal, a player who loves to pierce through defensive lines, has a keen eye for the long-range shots and a one who uses his game sense. He also has some experience under his belt, having been part of the sides that played the World Cup Qualifiers and Asia Cup earlier this year and also being the vice-captain of the 5×5 team.

Joining Athapaththu will be Arnold Brent, brother of Clinton Thevakumar, the captain of SL Men’s 5×5 team. This youngster certainly has the potential to be his brother’s successor. He is an experienced campaigner in the Sri Lankan 3×3 community and a very skilled shooter, who can make his way to the rim in any given situation.

This lot is ambitious, intelligent, well-disciplined and they are top-notch shooters. They may not be a team that could go for a medal in a competition like the Commonwealth Games, but the experience they gain here will no doubt be invaluable.

Captain Chalani Perera of Seylan Bank, her mentality and the strength gives life to the team. She doesn’t have much experience in international competition but has been active in the 3×3 format since it’s inception in the country.

The skipper will be supported by Lubna Morseth, a well experienced player who recently engaged in the FIBA 3X3 Asia Cup and FIBA 3×3 World Qualifiers. Her strength and high percentage shooting skills top the list on what she brings to the table for Sri Lanka.

The 3rd and 4th slots are being filled by Nihari Perera and Taniya Perera. Once again, these young ladies have represented Sri Lanka on many occasions. Nihari was one of players who toured both Qatar and Singapore (World Cup Qualifiers and Asia Cup). With the international exposure she has got over the past few years, she is capable of giving much more to the team than she did in the last two international competitions. Taniya Perera is another hard-working player whose main strength lay in her penetrative skills.

Ajith Kuruppu will take on duties as the teams official whilst Shivashkthi Selvaraja will assist the teams as the Head Coach.