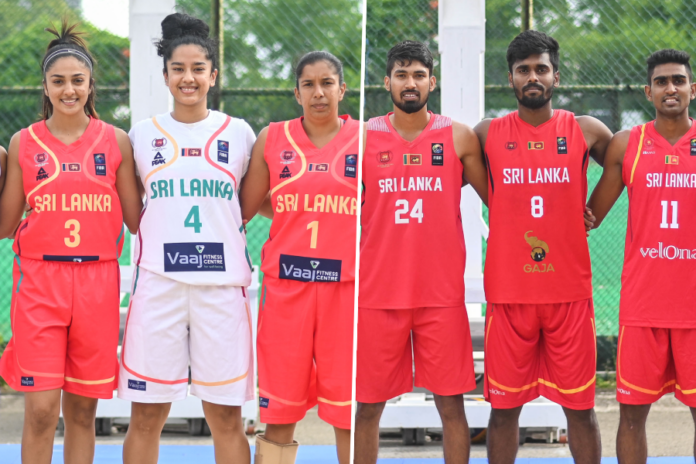 The Sri Lanka Open Women’s and Men’s teams took wing to Singapore today to take part in the FIBA 3X3 Asia Cup 2022 from 6th– 11th of July 2022. The tournament returns for its fifth edition this year, and will take place at the picturesque Marina Bay Sands Event Plaza.

This event marks the return of the Asia Cup since the beginning of the COVID-19 pandemic, and will be the second time a FIBA 3X3 official competition is organized in Singapore. The winners of this tournament will qualify for the FIBA 3X3 World Cup in 2023. Amongst the 53 teams are the reigning Men’s champions Australia, who will give their utmost in securing the title at the FIBA 3X3 World Cup 2023.

The FIBA 3X3 Asia Cup will open its first session’s qualifying draw on the 6th of July. The day’s proceeding will commence with Kazakhstan Women taking on Papua New Guinea Women at 9.00 a.m. The Sri Lanka Men’s team will start from the qualifying stage, whereas the Sri Lanka Women’s team has earned their direct ticket to the main draw.

The Sri Lanka Men’s team will go against Tongo and China in the qualifying rounds on the 7th. The first match for the Men’s team is scheduled to take place at 8.45 a.m., and the second at 6.40 p.m. on the same day. The Sri Lanka Women’s team will take on the team which qualifies from QD E/I and Chinese Taipei on the 8th, with the two matches being scheduled to take place at 4.15 p.m. and at 7.55 p.m.

Representing the Men’s team are the Captain Chanuka Fernando of DFCC Bank [Age 25] – a cager who has a lot of international exposure in both 5X5 and 3X3 basketball, Pawan Gamage of SL Army [Age 26] who has been representing SL over a decade and a lad who has given his best at every single game, Nimesh Fernando of Fairfirst Insurance [Age 25] – the strength and the power source of the team, and Dasun Nilantha – a Sports Officer at the Zonal Education office [Age 24], who will be playing his first 3X3 international tournament this year.

Representing the Women’s team are Captain Anjalee Ekanayake of HNB [Age 33] – a proud woman who has represented SL on many occasions alongside Benika Thalagala of Seylan Bank [Age 34] who is a well-known name in Sri Lanka women’s Basketball. Lubna Morseth of Commercial Credit Bank [Age 20] who has excelled in both Basketball and Netball and is a tough player who has her own playing style, and Nihari Perera of Commercial Credit Bank [Age 22] – a young lady with style who has been representing SL since her school days.

As both teams are tightened up with experience, they are expected to give their A game in this tournament in order to book their spots at the FIBA 3X3 World Cup 2023.

The two Captains talking to ThePapare.com, said they have gone through an intensive training of three months under their Head Coach, Mr. Ajith Kuruppu. The training of these three months will indeed be of help at the tournament for them to give a good fight to their opponents. Furthermore, both teams are expecting to give their best in each game and qualify for the FIBA 3X3 World Cup in 2023.