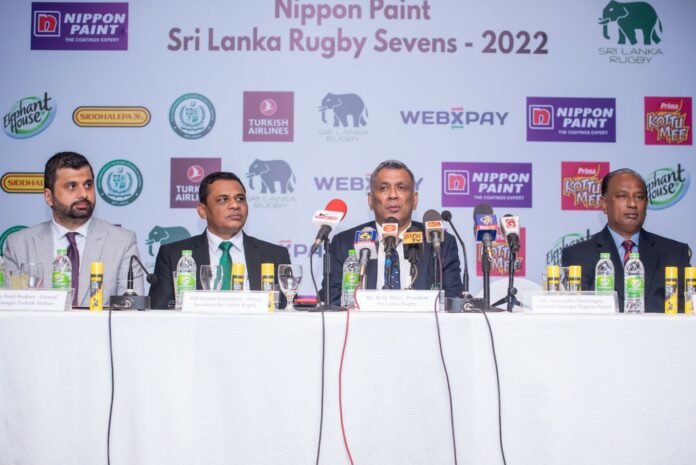 Sri Lanka Rugby (SLR) is set to hold its premier rugby sevens competition which was traditionally called the ‘Inter club rugby 7’s’ but has been renamed as ‘Sri Lanka Rugby 7s’ to include a wider player base on the 8th and 9th October at Race course grounds, Colombo.

In a drive to popularize the oval shaped ball gamed with the female population of the country Sri Lanka 7s 2022 will feature two dedicated segments for women’s rugby teams with four club teams competing in the club segment while eight teams will vie for honors in the provincial competition.

Sri Lanka Rugby (SLR) President Rizly Ilyas along with the Executive Committee launched the competition and its respective sponsors during a press briefing held in Colombo today (5th).

SLR President Rizly Ilyas thanked the generous sponsor for coming forward to support rugby despite the difficult economic climate the country is currently in and assured that their investment will drive the upliftment of the game in Sri Lanka.

Nippon Paints will be the title sponsor of the competition while Pakistani High Commission, Webex Pay & Prima Kottu Mee coming in as associate partners. Turkish Air Line has joined hands as the official airline partner, Elephant house as the food beverage and ice crem partner while Siddhalepa spray will be the pain relief partner of the event.

Sri Lanka’s #1 Sport’s hub www.ThePapare.com will bring you the action of Sri Lanka Rugby 7s live and exclusively on the 8th and 9th of October from 8.30am onwards from Race course grounds.