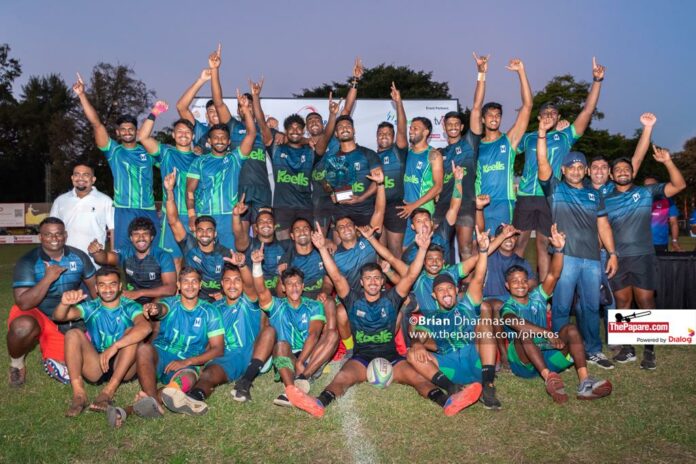 A last-gasp try by Avishka Lee secured John Keells Holdings ‘A’ the Mercantile Sevens Cup in the 50th edition of the tournament, held at CR & FC. JKH ‘A’ won the Cup Final 10 points to 07, against a strong 3DH international outfit.

Four teams participated in this segment and played each other during the group stages, with 3DH International, JKH ‘A’ and Dialog Axiata dominating the games as all three teams won two game each.

The results of the Groups Stage games are as follows –

In the semi-finals, 3DH International was victorious against JKH B 38 points to 12, after an early scare by the underdogs JKH B, as they led the game 12 – 10 with tries from Avantha Lee and Ishan Fernando. Sudam Sooriyaarchchi and Nigel Ratwatte went over for 3DH, but a brace from the speedster Buddima Piyarathna took the game away from JKH B, while two more tries from Gamunu Chethiya and Tharinda Ratwatte booked their place in the final.

In the second semi-final, JKH A eased past Dialog 26 points to 07. Sevens sensation Srinath Sooriyabandara scored two tries, while Riza Rafaideen and Ramesh Fernando scored one each for the JKH AA and Mithun Hapugoda scored a consolation try for Dialog.

A last minute try from Nishon Perera was good enough for Dialog to take home the Plate, as they beat JKH B 17 points to 14.

JKH B opened their scoring through the youngster Ishan Fernando, as his speed was too much to handle for Dialog. Mithun Hapugoda scored for Dialog just before the half time breather to cut down deficit as JKH led at the break 7 points to 05.

Dialog opened the scoring in the second half as Hapugoda drew three defenders towards him and opened space for Anuradha Hearth to touch down. The pendulum swung towards JKH B as Chathura Zoysa went over as for the second try as they took the lead, but Hapugoda had other ideas as he went through the JKH B defense with his dancing shoes to send his teammate Nishon Perera over the line in the last move of the game to win the Plate.

After a getting a thumping 24 to nil in the last group game, JKH A came in as the underdog against the favorites 3DH International, for the cup final.

JKH A opened up the scoring through Richard Dharmapala as Janidu Dilshan carved open the 3DH defense and offloaded ball to his mate to touch down in the corner. A moment of brilliance from Gamunu Chethiya saw him beat two defenders to slam over in the dying ambers of the first half to take a 7-5 lead at the break.

The second half was a nail biter as both teams dished out some existing Rugby, but a few yellow cards for 3DH hampered their progress as JKH A kept up the pressure to score a winner, and Avishka Lee sneaked through the defence line of 3DH to touch down to take home the cup.

Sampath Bank, the surprise package in this tournament, won the Bowl final against Brandix 17 points 12, after a late scare from the apparel industry giant was not good enough for the young outfit from Sampath.

Fairfirst Insurance won a close tussle to win over their insurance counterparts Ceylinco 5 points to nil to secure the shield.